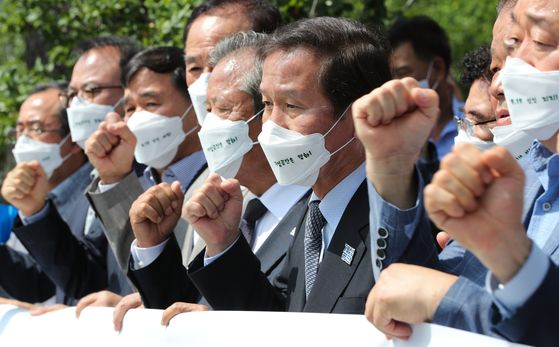 South Korean owners of factories at the Kaesong Industrial Complex, a linchpin of inter-Korean economic cooperation that was shuttered in 2016, hold a press conference protesting the dispatch of propaganda leaflets to North Korea in front of the central government complex in northern Seoul on Monday. [NEWS1]


South Korea’s chief of police said Monday that a 24-hour monitoring system will aim to prevent activist groups from distributing propaganda leaflets to North Korea, which have recently provoked bellicose statements and a severing of inter-Korean communications from the North.

In a press conference in northern Seoul on Monday, Police Commissioner Min Gap-ryong said officers have been dispatched to key locations near the demilitarized zone with the North that activists could use to float objects like fliers into North Korean territory by air or water.

“We cannot allow a situation where the public feels threatened by North Korea as a result of [activists] sending provocative material to the North through balloons and other means,” Min said.

The commissioner further said police were examining legal means to punish two activist groups led by North Korean defectors resettled in the South. The Ministry of Unification said it had pressed charges against the groups last week.

The two civic groups, Fighters for a Free North Korea and Keun Saem, dispatched balloons containing thousands of propaganda leaflets, books, memory sticks and $1 bills across the border into the North on May 31. In April, the groups sent leaflets announcing that two defectors, Ji Seong-ho and former diplomat Thae Yong-ho, were elected lawmakers in South Korea's April 15 general elections.

On June 8, the organizations attempted to send rice in water bottles to the North by floating them up from the coast of Samsan-myeon in Ganghwa County, Incheon, but their efforts were stopped by local residents.

Incheon Mayor Park Nam-chun on Monday said the latter attempt to send the plastic bottles to the North were “excessive and ill-advised acts” that threatened to endanger the lives of local residents of the area as well as peace on the Korean Peninsula, and said the city would take “all possible administrative measures” against the acts.

“Though there is a limit to how [effectively the city] can respond, I have again called for strong measures to be put in place by the relevant department so that practical results can be seen,” Park said.

Supported by residents of Ganghwa Island, who have protested the leaflet scattering due to the proximity of the area to the North, Incheon city officials are considering filing complaints against the activist groups for violating the Maritime Environment Management Act with the plastic bottles.

These ramped-up measures by central and local governments in South Korea against the groups have generated significant controversy from conservative groups who say the government’s measures are meant to appease the North.

Park Sang-hak, the head of Fighters for a Free North Korea, on Sunday said attempts to rein in his group would not stop it from continuing its activities, while claiming he would “wipe clean the forces of evil by raining down a million [leaflets] atop the head of the barbaric hypocrite [North Korean leader] Kim Jong-un.”

A North Korean propaganda outlet, the Arirang Meari, on Monday published an article and broadcast a video taking aim at Park, who is a defector himself, calling him a traitor and “lunatic” and accusing him of attempting to cause war on the peninsula.