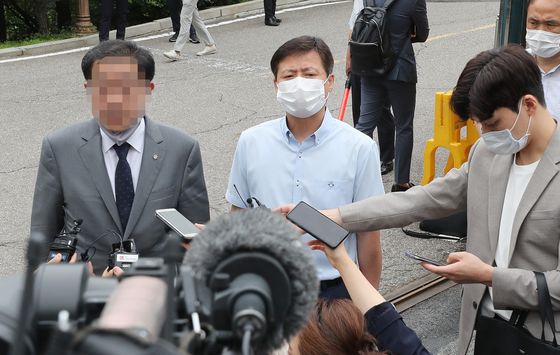 Park Jung-oh, center, the head of the North Korean defector group Keun Saem, speaks to the press after attending a Ministry of Unification hearing on the revocation of his group’s operational permit. [YONHAP]


The Ministry of Unification held a hearing for two North Korean defector groups on Monday as an initial step toward revoking their government permits after the groups dispatched propaganda leaflets into the North.

The South Korean government is cracking down on the groups after their leaflet campaign incited Pyongyang into retaliating against Seoul by cutting off communications and unilaterally demolishing the inter-Korean liaison office in Kaesong. Revoking the groups' operational permits would make it harder for them to raise funds.

The two groups, Fighters for a Free North Korea and Keun Saem, were responsible for disseminating 500,000 leaflets into the North on May 31 -- with items like one-dollar bills, memory sticks and books floating inside the balloons.

According to the ministry's statement, Keun Saem’s chief, Park Jung-oh, attended the hearing and responded to the government’s motion to revoke their corporate permits. His brother Park Sang-hak, who heads Fighters for a Free North Korea, did not attend.

The ministry said in a press release that it will revoke the groups’ licenses once it verifies whether it needs any additional documents needed to make the decision.

The basis behind the ministry’s decision is the groups' alleged violations of Article 38 of South Korea’s Civil Act, which grants authorities the power to cancel such licenses if the group in question “engages in acts harming public interests.”

The ministry and a number of local governments claim that attempts by defector groups and other like-minded organizations to incite agitation in the North threaten the safety of local residents by triggering retaliation.

In 2014, North Korean troops in the demilitarized zone (DMZ) fired several rounds from an anti-aircraft gun at balloons released by an anti-Pyongyang group, setting off exchanges of gunfire with South Korea’s military.

Operating businesses outside the conditions attached to the initial permit also warrants cancellation under Article 38. The Unification Ministry argued Keun Saem acted beyond the scope of its incorporated license by floating items like rice, memory sticks and Bibles contained in plastic bottles through waterways into the North, including an attempt made on June 23.

Park Jung-ho’s attorney fought back, saying ahead of Monday's hearing that the ministry’s move to revoke the groups’ licenses represented a “violation of the freedom of speech and assembly guaranteed by the Constitution.”

Without a corporate permit, the two groups will lose the right to claim tax deductions for membership fees and other donations, and donors will no longer receive tax benefits for their contributions.

Keun Saem said if the ministry moves forward with canceling its license, the group plans to respond by challenging the decision in a local court.

The two groups are also under criminal investigation by the police for complaints filed by the ministry and local governments over the leaflet dispatches.

On Sunday police raided the Seoul offices of the two groups, as well as the brothers’ phones and automobiles, obtaining evidence that police said will be analyzed to examine how the organizations generated funding and used their budgets.

Local media outlets, as well as Rep. Kim Hong-gul of the ruling Democratic Party, have raised allegations of accounting fraud and misappropriation within several defector groups, including Fighters for a Free North Korea.