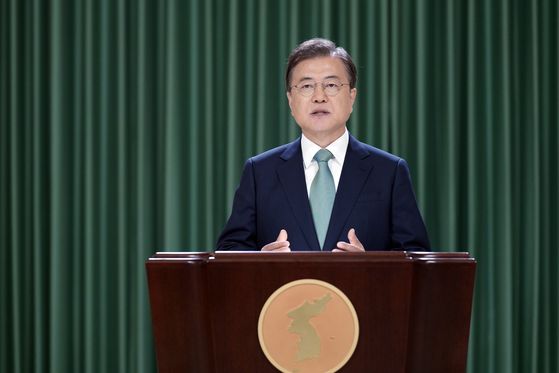 South Korean President Moon Jae-in delivers a filmed address for a ceremony to mark the 20th anniversary of the first summit between South and North Korea in 2000. [BLUE HOUSE]


Confronted with the possibility of renewed military tensions on the peninsula, South Korean President Moon Jae-in on Monday urged North Korea to leave open the door for dialogue in light of past efforts to build peace between the two countries.

In a recorded public address for a ceremony marking the 20th anniversary of the first inter-Korean summit in 2000, Moon pledged he would not turn back on the promise he made North Korean leader Kim Jong-un at their own first summit two years ago, and that South Korea would fully implement inter-Korean agreements pledging to end hostilities.

Perhaps more surprisingly, the president noted the Korean Peninsula was “not yet in a situation where the South and North can move freely according to their own will,” stressing that “international cooperation” was necessary for such a state.

“But there clearly are projects that the South and North can independently pursue,” he added.

Moon’s sentiments on such independent projects have been hinted at by South Korean government officials before, but have been received with no enthusiasm by Pyongyang, which is irate at Seoul’s refusal to depart from a U.S.-led economic sanctions campaign.

Primarily promoting the diplomatic gains of the past two years, the president’s pledges were notably subdued — and vague — in spite of North Korea’s decision to cut ties with the South this month and undo the successes of Moon’s engagement.

In a series of blistering statements by top officials over the past week that used propaganda leaflets from South Korean activists as a pretext, North Korea announced it was severing all communications with South Korea as the first in a series of measures meant to punish Seoul for remaining in lockstep with Washington amid a deadlock in denuclearization negotiations.

Those statements culminated with one from Kim Yo-jong, Kim Jong-un’s younger sister and a rising power in the regime, on Saturday warning of a military provocation that threatens to return the peninsula to the tensions it faced following Pyongyang’s nuclear test in 2017.

Fears of renewed hostilities — and the undoing of the Moon administration’s hard-won détente with the North over the past two years — cast a shadow over ceremonies in Seoul marking the 20th anniversary of the signing of the so-called June 15th Joint Declaration between the two Koreas on Monday.

The South Korean government’s unease was palpable in its decision to diminish the size of the official ceremony, which was due to be held Monday evening under the slogan “Peace.Come” at the Odusan Unification Observatory in Paju, Gyeonggi, overlooking the Imjin River separating the South from the North.

In a New Year’s address, Moon vowed to hold the event jointly with the North in an effort to revive momentum for dialogue, but Pyongyang rebuffed any discussions with South Korean officials before launching its bombshell statements towards the South earlier this month.

Minister of Unification Kim Yeon-chul, South Korea’s top inter-Korean official, said at a ceremony Monday morning the spirit of that first summit must be remembered by both parties in moments of crisis.

Other political figures stressed a more active course for Seoul to take to preserve dialogue with Pyongyang.

In a meeting between leaders of the ruling Democratic Party (DP), Rep. Sul Hoon proposed Moon dispatch a special envoy to the North.

Former Rep. Park Jie-won, who acted in such a role as Kim Dae-jung’s culture minister ahead of the historic 2000 summit, said in a radio program Monday a special envoy should carry a surprising proposal to the North to prevent a complete breakdown in ties.

Even opposition leaders raised the idea of sending a special envoy. Rep. Yoon Sang-hyun, an independent formerly aligned with the conservative United Future Party, said a right-wing figure should be sent as Seoul’s messenger to bridge the ideological gap in North Korea policy in the South and push forward negotiations.

For their part, the DP and some of its liberal allies said they would pursue a ratification of the Panmunjom agreement from Moon’s first summit with Kim Jong-un in the legislature. The president himself said at a meeting with aides Monday that the National Assembly’s approval of the agreement was necessary to ensure continuity is preserved in South Korean government policies toward the North regardless of which party is in power.

A total of 173 DP and allied lawmakers on Monday also signed a resolution calling for a formal declaration to end the 1950-53 Korean War as a means to assure the North of peaceful intentions.