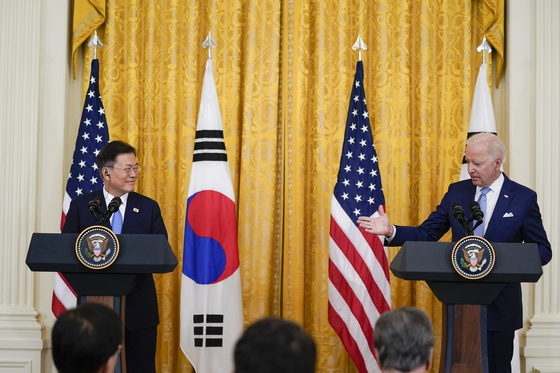 President Joe Biden, right, speaks during a joint news conference with Korean President Moon Jae-in, in the East Room of the White House on Friday in Washington. [AP]


SEOUL, WASHINGTON – In a summit at the White House, President Moon Jae-in secured major vaccine cooperation with the United States, including supplies for Korean  troops, and a lifting of restraints on Korea's missile development.


In return, U.S. President Joe Biden received investment pledges from Korean companies totaling $40 billion. Top executives from SK, Samsung, LG and Hyundai Motors were present at a White House news conference after the summit, and Biden made them stand up to accept a round of applause.

Moon and Biden said they had successful discussions on a range of issues including North Korea and other regional and global issues such as restoring trilateral cooperation among Seoul, Washington and Tokyo and climate change.

During the press conference, the two leaders announced a “comprehensive partnership” to produce Covid-19 vaccines for Korea and other countries around the world.

According to Moon, the United States will provide technology in the partnership and Korea will offer its production capacity to increase the global vaccine supply and end the pandemic.

The United States will also supply vaccines for 550,000 Korean troops. Moon said the supply agreement demonstrates the strength of the Korea-U.S. alliance.

Before heading to the United States, Moon said he would use the summit to make Korea a global vaccine hub.

Moon also announced at the press conference that Biden agreed to completely lift the Revised Missile Guidelines [RMG] that have restricted Korea’s missile development since 1979.

With the lifting of the RMG, Korea will have what Moon has previously referred to as "complete missile sovereignty” and will no longer be restrained by payload, fuel-type or range limits. Until now, Korea has been restricted to develop and operate ballistic missiles with the range of 800 kilometers.

In a sign that checkbook diplomacy has survived the transition from the Donald Trump era, Korean companies committed to $40 billion of investments in plants and other facilities in the United States prior to the summit, a sum that includes $17 billion from Samsung Electronics.

LG Energy Solution and SK Innovation will spend a combined $14 billion to ramp up electric vehicles battery production in the United States.

SK hynix will spend around $1 billion to establish a research and development center focused on AI and advanced NAND flash memory in Silicon Valley. Hyundai Motor and Kia confirmed a total of $7.4 billion of investment in the United States through 2025 to start production of electric vehicles.

At the press conference, Moon and Biden said they agreed to the importance of dialogue with North Korea. “The two nations share the willingness to engage diplomatically with the [North] to take pragmatic steps to reduce tensions as we move toward our ultimate goal of denuclearization of the Korean Peninsula,” Biden said.

Biden announced that Sung Kim, a veteran diplomat involved in North Korean nuclear talks in the Obama and Trump administration, was appointed U.S. special envoy to the North. Kim was also U.S. ambassador to Seoul from November 25, 2011 to October 24, 2014.

In the press conference, Biden made clear that he wants to make “practical progress” in boosting security for the U.S. and its allies. He said he would be willing to meet with North Korean leader Kim Jong-un — if Kim made commitments to reduce his nuclear arsenal and followed through with them.

Ahead of the summit, Biden invited Moon to a ceremony awarding the first Medal of Honor of his presidency to a Korean War veteran. Retired Army Colonel Ralph Puckett was presented with the highest military honor by the United States for his "conspicuous gallantry" in the Korean War. 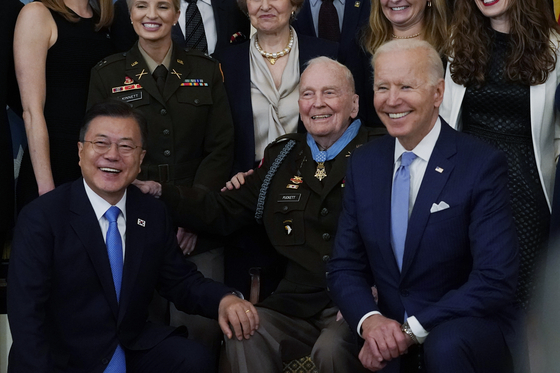 President Joe Biden, right, retired U.S. Army Col. Ralph Puckett, center, and Korean President Moon Jae-in, pose for a photo after Puckett was presented the Medal of Honor in the East Room of the White House on Friday. [AP]

"President Moon, it's a real honor to have you here participating in this ceremony today," Biden said. "The strength of the alliance between the United States and the Republic of Korea was born out of the courage, determination and sacrifice of the Korean troops fighting shoulder-to-shoulder with American troops. And having you here today is an important recognition of all that our nation has achieved together, both of them, in the decades since."

Following the ceremony, Biden and Moon had a one-on-one meeting in the Oval Office for 37 minutes. A bilateral meeting of the two leaders and their top aides followed for 57 minutes and an expanded meeting with more aides took place for 77 minutes.

After the three summit sessions, Moon and Biden held the press conference in the East Room.

During the Moon-Biden summit, the leaders did not wear face masks. Moon was the first head of state to visit the White House and meet with Biden without a face mask. Biden received his Covid-19 vaccine shots in December 2020 when he was the president-elect. Moon received his shots earlier this year.