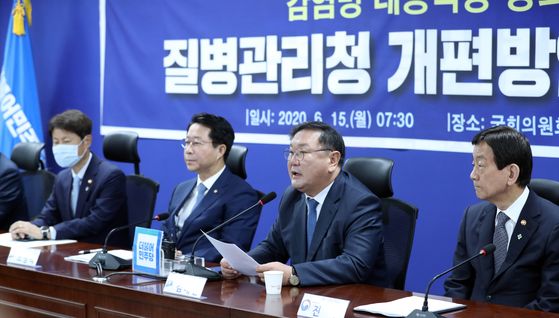 The ruling party and the Moon Jae-in administration finalized a plan Monday to give the Korea Centers for Disease Control and Prevention (KCDC) more power over its budget and personnel affairs as an independent office, while maintaining its own research institute.

Senior members of the Democratic Party (DP), the administration and the Blue House held a meeting Monday morning and confirmed a plan to elevate the status of the KCDC as an independent administration, a move aimed at strengthening the country’s comprehensive response to infectious diseases.

The latest plan announced on Monday was a second attempt to reorganize the KCDC, since President Moon Jae-in nixed the initial proposal.

On June 3, the Ministry of Interior and Safety announced a plan that the KCDC, currently within the Ministry of Health and Welfare, would become a stand-alone office, but lose the National Institute of Health. The institute, in charge of public health research, was to instead become a part of the health ministry under the plan.

KCDC Director Jung Eun-kyeong and experts protested the plan, saying the center must have its own research arm. They also said the center would be left with fewer workers and a smaller budget without the institute. President Moon ordered officials to reconsider the plan on June 5. 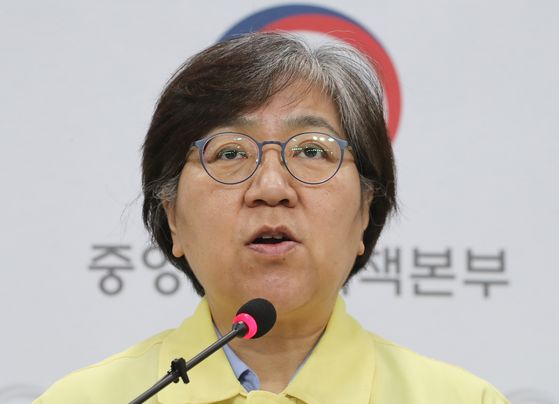 
Rep. Cho Jeong-sik, chief policymaker of the DP, said the new plan reflects feedback from experts as well as public sentiment. A bill to revise the Government Organization Act to introduce the changes will be submitted to the National Assembly this week, Cho said.

Interior Minister Chin Young also admitted that the government had failed to take public opinion and experts’ concerns into account when it first drafted the plan.

“We took into account concerns reported by the media and had serious consultations with the KCDC and other relevant offices to create this new plan,” he said.

Once its status becomes independent, the tentative English name for the restructured KCDC will be the Disease Control and Prevention Administration (DCPA). Its head will be a vice minister-level official with autonomy to manage the budget and hire experts.

Created in 2004 in response to the severe acute respiratory syndrome (SARS) outbreak, the KCDC has been tasked with Covid-19 quarantine measures during the pandemic and providing daily briefings to the public since the outbreak began.

Following the outbreak of the Middle East respiratory syndrome (MERS) in 2012, the KCDC director was promoted to a vice minister-level official, but the center has faced a series of administrative obstacles to effectively counter outbreaks and implement long-term policies. A personnel shortage has been a perennial problem.

According to the latest plan, the DCPA will have a larger budget and more manpower in order to maintain 24-hour situation monitoring, collect information and analyze big data. Its cooperation with local governments will also be reinforced through new regional offices.

The ruling party, administration and the Blue House agreed that the Center for Infectious Disease Research of the National Institute of Health will be expanded under the supervision of the DCPA.

“This means the DCPA will be in charge of the entire process, from infectious disease monitoring to the development of cures and vaccines and assisting in their commercialization,” Cho said.

When a manpower shortage is seen during an outbreak, workers from the Ministry of Health and Welfare, the DCPA and the National Institute of Health will be loaned to one another.

As of now, the ministry is led by Minister Park Neung-hoo, a social welfare expert. It currently has one vice minister, Kim Gang-lip, a career public servant who served in both the ministry's welfare and public health policy bureaus.