Korea now ranked as the world's 23rd most competitive country

Korea now ranked as the world's 23rd most competitive country

Korea's competitiveness ranking jumped this year, largely on its handling of the coronavirus outbreak, though its fiscal management rank fell due in part to the money it spent in battling the pandemic.

According to the list published annually by Lausanne, Switzerland's Institute for Management Development (IMD), Korea is No. 23 globally in terms of competitiveness. 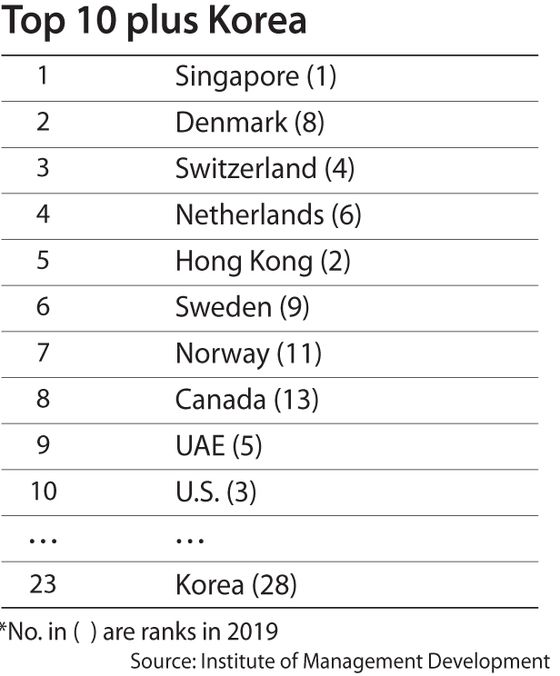 “The minimizing of negative impact amid the spread of Covid-19 including the aggressive quarantining and swift actions seems to have helped Korea’s competitiveness,” the Finance Ministry said in a press release.

IMD said the latest world competitiveness rank reflected the ongoing trade dispute between the United States and China and the coronavirus pandemic.

“The executive survey employed in the ranking ran from February and April 2020, and thus somewhat captures the Covid-19 impact,” IMD statement said.

The government said it will continue working on policies related to job support, job security and the education system, and make additional efforts in areas that turned out to have weakened, including government fiscal management.

The country's rank moved up in almost all categories, including economic performance, government efficiency, business efficiency and infrastructure.

Korea ranked fourth among the seven countries in the 30-50 club — countries with more than 50 million people where national income per capita exceeds $30,000. Korea joined the 30-50 club last year.

It beat a number of major economies, including France, Japan and Italy.

Korea improved in terms of the domestic economy, trade and inflation, but it was weaker in the employment category.

Singapore remained at the top of the list for the second consecutive year, followed by Denmark and Switzerland.