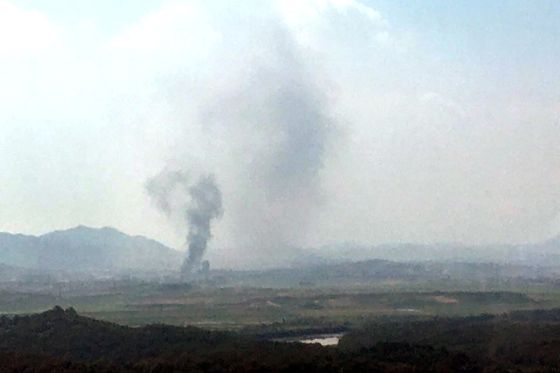 Smoke rises from the Kaesong Industrial Complex on Tuesday afternoon after North Korea demolished the inter-Korean liaison office in the zone. [YONHAP]


North Korea destroyed the inter-Korean liaison office in Kaesong on Tuesday, driving tensions on the peninsula to a level not seen since the regime’s last nuclear test in 2017.

The regime’s state-run Korean Central Television reported in its 5 p.m. broadcast that the North had “completely destroyed” the liaison office in order to “meet the expectations of an angry public demanding punishment from riff-raff and those who turned a blind eye,” referring to activists in South Korea who dispatched propaganda leaflets into the North and the South Korean government.

Regarded as the most significant tangible achievement of the Moon Jae-in administration’s short-lived rapprochement with Pyongyang, the inter-Korean liaison office in the North Korean border city of Kaesong was established in September 2018 after a series of inter-Korean summits that year.

The office — fashioned out of a building formerly used to hold inter-Korean meetings at the Kaesong Industrial Complex before it was shuttered in 2016 — has been vacant since January, when both governments agreed to temporarily shut it down due to the coronavirus epidemic.

Yet in a rapid downward spiral in relations that shocked officials in Seoul, Pyongyang announced earlier this month it would pull out of the office over South Korea's failure to prevent activists from sending propaganda across the border, shortly before the regime cut off all official communications with the South.

Seoul’s presidential office, the Blue House, expressed strong regret at the North’s “unilateral demolition” of the liaison office, calling it an “act that defeats the expectations” of all seeking peace on the Korean Peninsula.

“The government makes it clear that the responsibility for this situation lies solely with the North,” said Kim You-geun, deputy chief of the Blue House national security office, following a national security council meeting headed by Moon himself.

“We warn that if the North continues to undertake measures that escalate the situation, we will respond with strong action,” he said.

According to data from the Unification Ministry released by an opposition lawmaker, the South Korean government spent around 16.9 billion won ($13.9 million) to renovate and maintain the liaison office on North Korean soil through its one year and nine months of operation. 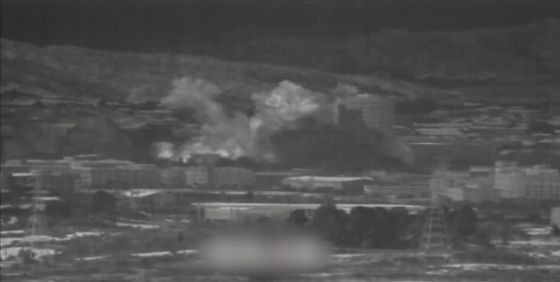 A screen capture from a video filmed by South Korean intelligence of the North's demolition of the inter-Korean liaison office at Kaesong on Tuesday. [MINISTRY OF NATIONAL DEFENSE]


Per an arrangement between the two sides reached before the opening of the office, Seoul agreed to pay for all costs involved in construction and maintenance in exchange for Pyongyang hosting the building on its territory.

Based on the ministry’s data, the two Koreas exchanged a total of 132 communiques at the office and held a variety of lower level discussions on cooperation in fields like forestry, health and sports until the North lost its appetite for talks following the breakdown of denuclearization negotiations with the United States at a summit in Hanoi, Vietnam, in February 2019.

The demolition also followed a statement from North Korea’s military on Tuesday that said it could move troops into areas demilitarized under an inter-Korean agreement, hinting at a plan to occupy and fortify two joint economic zones once shared with the South: the Kaesong Industrial Complex and Mount Kumgang tourism resort.

The North’s army is getting ready to provide a “sure military guarantee to any external measures” undertaken by the regime’s Korean Workers’ Party and government, said the General Staff of the North’s Korean People’s Army (KPA) in an English-language report carried by the state-run Korean Central News Agency (KCNA) Tuesday morning.

In her statement Friday — the same one that warned of the destruction of the liaison office — Kim Yo-jong said she had given the General Staff the “right to taking the next action against the enemy.”

The General Staff added it would target areas on the ground and the sea to scatter propaganda leaflets toward the South in response to those sent by anti-Pyongyang activists in South Korea.

According to South Korean military officials, the only areas in the North currently disarmed under an inter-Korean agreement are the Kaesong Industrial Complex and Mount Kumgang, as well as several guard posts in the demilitarized zone (DMZ) from which the two sides agreed to withdraw their forces following a military agreement signed in September 2018. 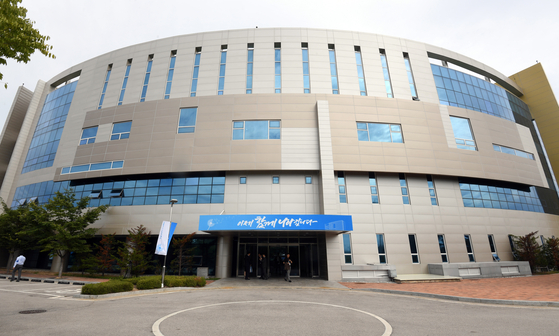 
The Kaesong Industrial Complex and the tourist zone on Mount Kumgang were the two linchpins of inter-Korean economic cooperation in the early 2000s, but both projects have been indefinitely shuttered after tensions flared between the Koreas over the past decade.

While no written contract mandates the North keep these areas free of a military presence, Pyongyang relocated its military divisions from around them after construction began on South Korean facilities in both zones.

After ground was broken on the industrial complex in Kaesong in 2003, the KPA redeployed its 6th Division, 64th Division and 62nd artillery brigade of the 2nd Corps to different locations 15 to 20 kilometers (9 to 13 miles) north of Kaesong.

More recently, after their third summit at Pyongyang in 2018, the two Koreas signed an agreement to reduce military tensions on the border that stipulated the demilitarization of the joint security area — the portion of the DMZ that houses the so-called truce village of Panmunjom — and the dismantlement of 10 guard posts in the DMZ.

Through a litany of statements from high-ranking officials this month concerning the distribution of propaganda leaflets by South Korean activists across the border into the North, Pyongyang threatened to pull out of the September agreement and henceforth regard Seoul as an “enemy.”

The North’s General Staff said in its Tuesday report it was “studying an action plan” that would have its army “advance again into the zones that had been demilitarized under the north-south agreement, turn the front line into a fortress and further heighten the military vigilance against the south.”

Such plans will be mapped out in order to receive approval from the Central Military Commission, it added, referring to the country’s supreme military decision-making body chaired by Kim Jong-un.