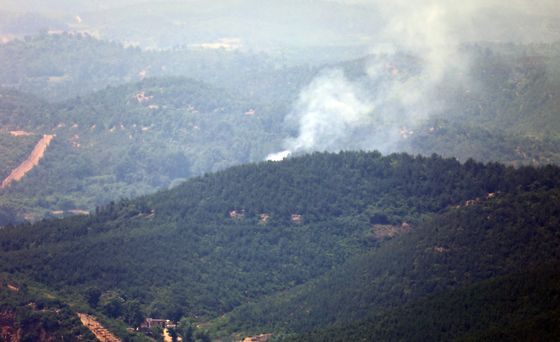 Smoke seen from an observatory in South Korea coming from the Kaesong Industrial Complex in North Korea. Military officials said Pyongyang had demolished the inter-Korean liaison office in the zone. [NEWS1]

South Korean military intelligence from the front lines where the First Corps is stationed reported the liaison office had been demolished after an explosion was heard around 2:50 p.m. on Tuesday.

The inter-Korean liaison office in the North Korean border city of Kaesong was the two Koreas’ sole fixed communication office, established in September 2018 as a result of a series of inter-Korean summits that year.

The office — which was fashioned out of a building formerly used to hold inter-Korean cooperation meetings at the Kaesong Industrial Complex before it was shuttered in 2016 — has been vacant since January, when both governments agreed to temporarily shut it down due to the coronavirus epidemic.

In an irate statement earlier this month, Pyongyang said it would pull out of the office over South Korea's failure to prevent activists from sending propaganda across the border, shortly before the regime cut off all official communications with Seoul.

The demolition came just hours after North Korea’s military on Tuesday said it could move troops into areas demilitarized under an agreement with the South, hinting that it could occupy and fortify two joint economic zones once shared with the South: the Kaesong Industrial Complex and Mount Kumgang tourism resort.