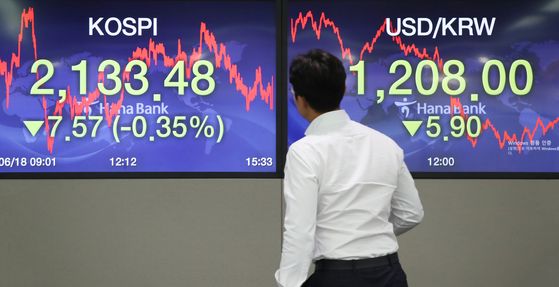 An employee stands in front of the screen with the final Kospi at the dealing room in Hana Bank, in Jung-district, central Seoul, Thursday. [YONHAP]


Stocks closed lower Thursday, ending a two-session rally, on investor concerns over a second wave of new coronavirus infections in the world's two largest economies. The won rose against the dollar.

The drop was mainly attributed to growing investor concerns over the rising Covid-19 tolls in the United States and China.

"The index is likely to remain in the current situation of fluctuating near the 2,200-level, until concerns regarding a second wave of the Covid-19 ease out," Samsung Securities analyst Seo Jung-hun said.

Growing appetite for profit-taking after two winning sessions also kept the index from exceeding the 2,200-level, he added.

Seven states in the United States, including Texas, Florida and Oklahoma, posted record highs in either daily or weekly average new infections on Wednesday, local time. The increase fueled fears that the United States may consider reintroducing economic lockdowns.

Virus-related tallies also flared in China's capital city this week. The communist state is said to have suspended more than 60 percent of flights to Beijing, while closing schools and tightening social-distancing measures.