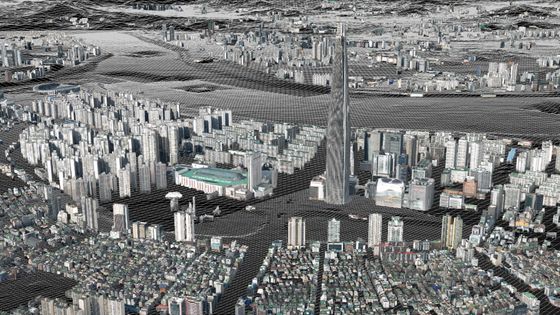 
Naver Labs, the research and development arm of internet portal Naver, created a 3-D map of all of Seoul, the company said Thursday.

In cooperation with the Seoul Metropolitan government, Naver Labs converted 2-D images of 605 square kilometers (234 square miles) taken from above into a high-definition 3-D map. Some 25,463 aerial photographs were used.

The map shows over 600,000 buildings in Seoul, including iconic structures like Namsan Seoul Tower in central Seoul and the National Assembly in western Seoul. The map will be available to the public in July, although it wasn't specified how the public would access it.

The Seoul Metropolitan Government will use the map for urban development projects or environmental issues.

Naver Labs said it will use the 3D spatial data to create high-definition 3D maps for future cars. The data will also be used to improve the accuracy of its Visual Localization and Visual Mapping technology, it said.

Starting last year, Naver Labs began distributing its high-definition map dataset of areas including Pangyo, Gyeonggi, Sangam and Magok, both in western Seoul, free of charge. The dataset is being used by autonomous driving researchers and start-ups in Korea.

Naver's net more than doubled in 2020