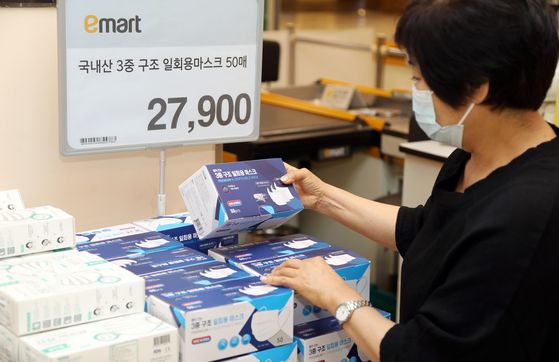 A customer looks at a box of disposable face masks made in Korea at an Emart store. [EMART]

KF94 is so last month. Customers want that rating, and they want masks to tick all the other boxes: breathable, made in Korea, Korean Ministry of Food and Drug Safety (MFDS)-certified.

The Drug Ministry issues the certification to masks that are good for use in medical institutions. Until recently, regular consumers generally didn't know the difference and would not distinguish between those with official approval and those without.

A woman surnamed Lim, who lives in Seongdong District, western Seoul, is on a hunt for better masks for her family. Previously, she used to buy face masks made in China to save money, since they are cheaper than those made in Korea. But she is rethinking this strategy after she heard reports of bugs being found in Chinese face masks.

One of her options is to buy the new anti-droplet masks, which are ultra thin and light and are designed to stop liquids. But she gave up on the idea after seeing them sell out so fast. But she said she was willing to pay more if she could get her hands on them.

Retailers are seeing more people like Lim as face mask options increase. Prices of face masks are also stabilizing, compared to early May when prices of disposable masks would double each day. Masks made from China, which once were priced as high as 20,000 won ($17) for 50 on the internet, now go for as much as 10,000 won. Face masks made in Korea also dropped in price. Once 60-70,000 won for 50, they are now 30-40,000 won.

Emart has been selling disposable face masks made locally at 27,900 won for 50 since June 10. In the four business days through June 15, 11,000 boxes, or 550,000 masks, were sold, according to the retailer. Masks are rapidly flying off the shelves, despite securing 1 million sheets every week. Lotte Mart also said it secured 10 million face masks from a local company. A box of 50 is currently sold at 29,900 won at Lotte Mart. 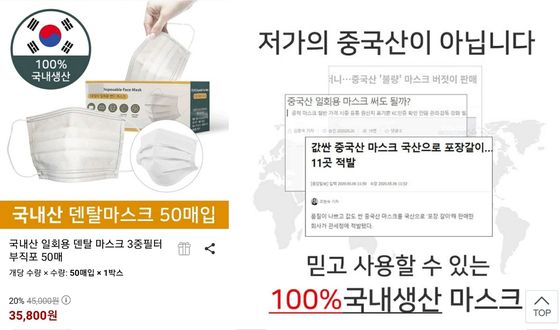 A face mask seller emphasizes their masks are made in Korea. [OPEN MARKET]


Online shopping malls highlight the manufacturing country and MFDS certifications to drum up demand from fussy consumers. Some emphasize how superior Korean face masks are in quality compared to those made in China.

Demand for KF-certified masks, which the government supplied via predetermined distribution channels, has fallen. At convenience store chain CU, KF-certified masks accounted for 78 percent of mask sales in April. That number dropped to 28.5 percent in June. Sales of single-use, surgical masks increased by 262 percent in June compared to a month earlier.

While 200 KF-certified masks used to sell out daily on average at Emart discount stores, sales have slowed since late April. The demand has dropped so much it now stocks on average only 50 masks on the shelves.

The supply of masks that were rationed by the government also decreased. The government said it will increase the amount available for purchase from three per person to 10 starting June 18. The government is considering an end to the public rationing of masks.

Droplet-proof masks, on the other hand, are selling like hotcakes.

Some even attempt to resell them for a higher price online. The Ministry of Food and Drug Safety said it cracked down on 274 cases of such illegal transactions from June 8 to 15.

To stop another wave of masks hoarders, lawmakers at the national assembly proposed a bill that increases the criminal sentence for mask hoarders from two years to four years behind bars.

“The Health Ministry needs to consider government rationing of droplet-proof masks rather than leaving it to the private sector,” said lawmaker Kang Gi-yun from the United Future Party.