North Korea's media says worse is yet to come

North Korea's media says worse is yet to come 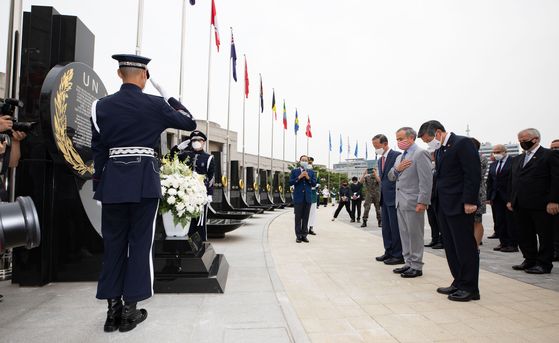 South Korean Defense Minister Jeong Kyeong-doo, right, and U.S. Ambassador to South Korea Harry Harris, second from right, pay tribute to those who died in the 1950-53 Korean War at the War Memorial of Korea in central Seoul on Thursday. [NEWS1]


North Korean state media on Thursday warned the demolition of the inter-Korean liaison office in Kaesong was just the beginning of its provocations toward the South, saying what could follow may “go far beyond the imagination.”

In an English-language editorial published Thursday, the North’s official newspaper, the Rodong Sinmun, unleashed a tirade against the South — and that was just one of a host of vitriolic commentaries on Thursday.

The demolition in Kaesong “is only the beginning,” the editorial read, adding the "self-control" of its army "passes beyond its limitation.

"The right to taking the action against the enemy has already gone over to our army."

The warning of further provocations possibly of a military nature follows a series of bombshell announcements by the North Wednesday in the aftermath of its blowing up of the liaison office, including one from the regime’s military on Wednesday that said it would remilitarize areas close to the border that were disarmed under past inter-Korean agreements.

Seoul’s military said Thursday it had not detected any troop movements in the North that suggested a carrying out of such threats, but several South Korean military sources said North Korean troops were spotted at civil police guard posts in the demilitarized zone (DMZ) that had been left empty as a result of an inter-Korean military agreement signed in September 2018.

An English-language report released by the General Staff of the North’s Korean People’s Army described four “detailed military action plans under examination” as of Wednesday: the deployment of troops to the Kaesong Industrial Complex and Mount Kumgang; reestablishment of civil police posts; an upgrade of “front guard duty to top class combat duty system throughout the front”; and resumption of its own sending of propaganda leaflets to the South.

With tensions on the peninsula at their highest since the North’s last nuclear test in 2017, South Korean Minister of National Defense Jeong Kyeong-doo on Thursday proclaimed Seoul would respond “firmly without hesitation” if the North undertook any actual military provocations.

“Tensions are rising amid an announcement from a spokesman of North Korea’s General Staff that [the North’s military] would seek ratification for its military plans [from the Central Military Commission of the North’s Workers’ Party],” Jeong said in a speech delivered to ambassadors of countries that came to South Korea’s aid in the 1950-53 Korean War.

“We will maintain a firm military preparedness while managing the situation stably to ensure military risks aren’t heightened further,” he said. 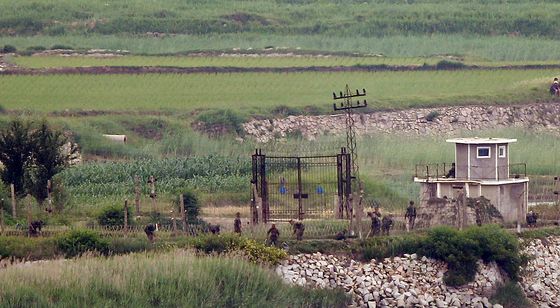 North Korean troops work next to a coastal barbed wire fence on the demilitarized zone (DMZ) in North Hwanghae Province on Thursday near a South Korean observatory in Incheon. [YONHAP]


While taken aback by the North’s sudden escalation this week — which prompted the Blue House to call a statement from North Korean leader Kim Jong-un’s younger sister Kim Yo-jong “rude” and “senseless” — the South Korean government appears to have opted for a measured response to Pyongyang.

After convening another national security council meeting Thursday, the Blue House stressed inter-Korean agreements must be respected by both parties, before adding South Korea would continue efforts to stop tensions from mounting further.

As part of an attempt to defuse the current crisis, Seoul dispatched its top nuclear envoy, Special Representative for Korean Peninsula Peace and Security Affairs Lee Do-hoon, to the United States on Wednesday to discuss the situation with his U.S. counterpart, Stephen Biegun, the special representative for North Korea.

According to Seoul’s Foreign Ministry on Thursday, the purpose of the visit was to “prevent the situation from worsening further.”

In Washington, just hours before Lee arrived, the White House on Wednesday announced it was extending five executive orders mandating economic sanctions on North Korea signed by U.S. President Donald Trump by another year, in light of the continuing “unusual and extraordinary threat” presented by the regime toward U.S. national security.

While successive U.S. administrations regularly extended sanctions on the North in June, this year they come at a highly sensitive time when Trump’s diplomatic outreach to Pyongyang appears to have finally proven itself useless.

Reiterating similar responses it gave this month, the U.S. State Department told Yonhap News Agency it was disappointed at North Korea’s actions and urged the country to cease “further counteractions” that could backfire on Pyongyang.

Wednesday also featured diplomatic talks in Hawaii between U.S. Secretary of State Mike Pompeo and China’s foreign policy chief, Yang Jiechi, on the two countries’ increasingly contentious relationship. Biegun, who is also deputy Secretary of State, was a part of those discussions, which were likely to have also included the North Korean issue.

Yet with Trump facing an uphill battle for reelection this November, experts doubt the U.S. administration will be willing to take further risks in engaging with a fuming Pyongyang.

Kim Joon-hyung, chancellor of South Korea’s National Diplomatic Academy and one of South Korean President Moon Jae-in’s foreign policy advisors, said that Trump’s uncharacteristic reticence on North Korea was intentional and signaled his aversion to making the issue a part of his campaign.

“If Trump hits back strongly against the North’s provocation, it could trigger North Korea to conduct a nuclear test and fire a [long-range] missile,” Kim Joon-hyung said on a radio program Thursday, in reference to acts that Trump has congratulated himself for having stopped through his summits with Kim Jong-un.

“[Trump] may choose to just let the situation slide as if nothing has happened.”

But, like it or not, the North Korea issue may return to haunt the president. According to a tell-all book by John Bolton, Trump’s former national security adviser, Trump was hardly concerned with the intricacies and implications of his unprecedented diplomacy with Kim Jong-un, regarding his summits with Kim as more of an “exercise in publicity.” 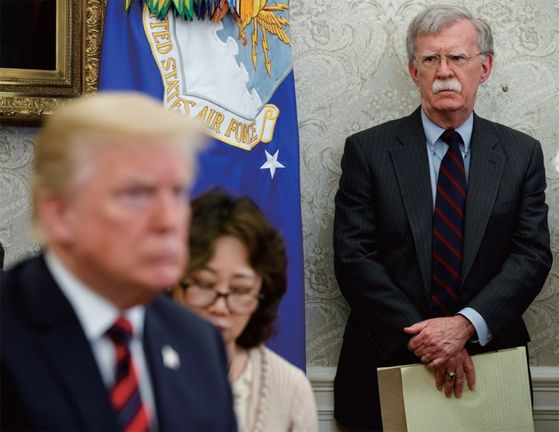 
Describing one case of the president’s erratic approach, Bolton claimed Trump was fixated for months about delivering a music CD containing the song “Rocket Man” from Elton John to Kim through Pompeo.

Bolton, who is known to have argued against giving Pyongyang any concessions leading up to the failed second Trump-Kim summit in Hanoi, Vietnam, in February 2019, also said Pompeo derided his boss behind his back at the first summit in Singapore by handing Bolton a note that said Trump was “so full of shit.”

Just a month after that summit, Pompeo said the likelihood that talks would lead to the North’s denuclearization had a “zero probability of success,” Bolton wrote.