[Post-Covid-19 New Normal] What is sports without the fans?

[Post-Covid-19 New Normal] What is sports without the fans? 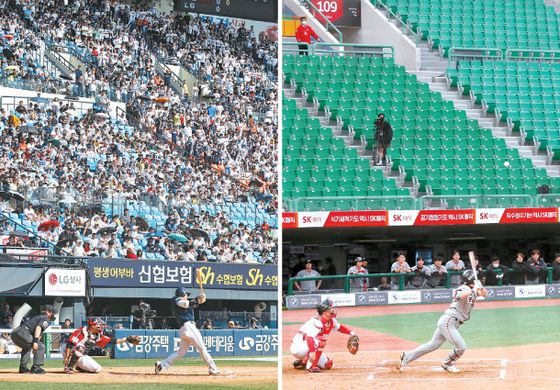 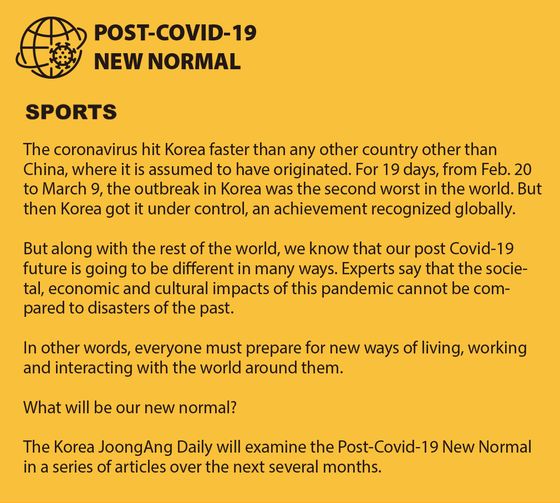 The coronavirus pandemic effectively silenced the world of sports.

By mid-March, professional leagues around the world had ground to a halt. Now they’re starting up again, but the stadiums are still eerily empty.

Jamsil Baseball Stadium is one of Korea’s most iconic sporting venues. Shared by the Doosan Bears and the LG Twins, Jamsil is the only stadium in Korea almost guaranteed to be full of fans six days a week for six months of the year. Now, it stands empty.

The only sound to be heard at Jamsil these days is the players themselves. The crack of the bat and the comforting thud of a ball hitting a glove are accompanied by the encouragement of teammates in the dugout and, occasionally, the team’s cheerleaders up on a stage in the middle of the empty stands.

Things are no different on the golf course.

Golf is a hugely popular sport in Korea, and every KLPGA Tour event draws a crowd of fans following their favorite players around the course. In the past, players have even complained about the constant noise of camera shutters. This year there is only silence.

By the middle of March, competitive sport had pretty much ground to a halt globally. With the exception of a few lesser-known competitions like the top-flight football leagues of Belarus and Turkmenistan, all sport had stopped by March 24, when the International Olympic Committee (IOC) announced the postponement of the 2020 Tokyo Olympics to July 23, 2021.

Korea saw coronavirus cases shoot up relatively early in the pandemic, and the competitive leagues here were some of the first in the world to be forced to respond to the outbreak. The K League, KBO and KLPGA Tours were all due to start their seasons in the spring, while the Korean Basketball League (KBL), Women’s Korean Basketball League (WKBL) and Korean Volleyball Federation (KOVO) were in the middle of their seasons.

The K League moved first, announcing on Feb. 21 that it would be delaying the start of the season, due to start on Feb. 29. The KBO followed suit in mid-March, while the KLPGA opted to cancel its March and April tournaments.

At the end of February, the KBL, WKBL and KOVO all announced plans to attempt to finish their seasons behind closed doors. All three leagues stopped playing at the start of March, before the WKBL announced at the end of the month that it was canceling the rest of the season. KOVO and the KBL quickly followed suit.

From the end of March until May 5, when the KBO season started, sport in Korea effectively stopped.

But the KBO had another issue to deal with. All 10 clubs were overseas at the beginning of March for spring training. At the end of February when the coronavirus outbreak was especially bad in Korea, spring training seemed like a blessing, but by early March the teams were in a race to get back to Korea as borders shut down and the situation worsened around the world.

Eventually all 10 teams made it back to Korea — although the Kiwoom Heroes had to charter a plane to get here — only to spend months waiting for the KBO to start.

For fans and players alike, playing behind closed doors is a bizarre experience.

As professional leagues have started up in Korea and around the world over the last few weeks, fans have turned to the internet and television to watch games and try and recapture some of the stadium experience. On the field, it’s a little bit harder to recreate that atmosphere.

Sports like baseball, basketball, football and volleyball are typically played in front of thousands of noisy fans. Remove this wall of noise, and players suddenly find themselves playing a completely different mental game.

“I couldn’t concentrate at all,” Heo said. “I lost my energy and kept asking myself, ‘What am I doing?’ Even if I tried to focus, I couldn’t and just didn’t want to play. That’s how I learned the importance of the fans.”

Even players of sports that prefer silence, like golf, found life behind closed doors surprisingly unnerving.

“Since [fans] really love KLPGA tournaments, when I play in Korea, it’s really fun,” said world No. 6 Kim Sei-young. “But the silence was very unfamiliar. Since there was no gallery, we played quicker, but I think it’s more meaningful and fun to play in front of the gallery.”

Due to the outbreak, Kim and the majority of the Korean golfers who play on the LPGA Tour have returned to Korea, and some of them have been playing on the KLPGA Tour. World No. 10 and 2019 LPGA Rookie of the Year Lee Jeong-eun was one of the players to play the KLPGA Tour events, and she also struggled on the empty course.

“I think there’s a positive and a negative,” Lee said. “When there’s a lot of people out there, it’s hard for the players to move and it takes longer. But on the other hand, it was a little boring. When I hit a good shot or make a birdie, the loud cheering and screaming gets me going.”

For big teams with expensive player contracts and stadiums to maintain, there isn’t a single positive to playing without fans. KBO clubs are said to make about a third of their revenue from ticket sales. It’s now nearly two months into the season and not a single ticket has been sold.

“Not only the KBO, but other leagues have also seen huge losses from ticket sales,”said Ryu Dae-hwan, secretary general of the KBO. “Along with the clubs, the entire industry — stores and restaurant inside the stadium and cheering equipment and uniform manufacturers — is hit hard. I don’t think there is a way for them to recover in the short term.” 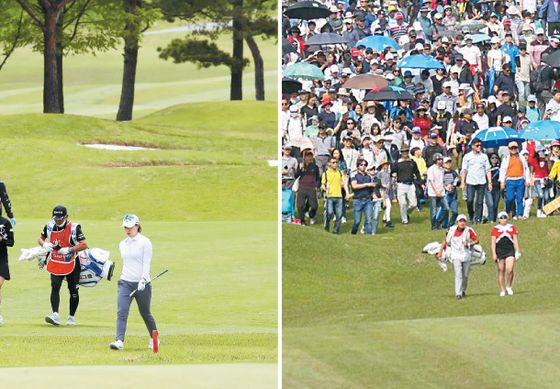 
In both football and baseball, the lack of background noise is affecting the players’ ability to concentrate as well. This lack of focus may also have led to an increase in the number of injuries so far this season.

“I don’t think there’s a positive about playing in an empty stadium,” said Ryu. “Without the fans, pro sports loses its meaning. So I guess the biggest disappointment is not being able to have the fans. The players also mention that they miss the fans in a lot of the interviews.”

One possible upside of the global sports blackout is the sudden increase in the global popularity of Korean sports leagues.

With the KBO restarting games on May 5 and the K League on May 8, Korea was suddenly home to two of the only professional leagues playing at a competitive level in the world.

“In baseball we were the second country and in football and golf we were the first to start playing,” said Kim Do-kyun, a professor in the graduate school of physical education at Kyunghee University. “I think these cases have allowed Korean sports to receive more attention from around the world.”

The KBO’s return on May 5 followed the Taiwanese baseball league on April 11, but still received a huge amount of international attention as the Korean league is considered one of the most competitive in the world.

The KBO season was picked up by ESPN, broadcasting six games a week in a deal with Eclat Media Group. With the MLB still suspended, that deal with ESPN is still going on.

The response was almost immediate. Dan Kurtz, who runs MyKBO.net, widely considered the No. 1 English-language source for KBO scores and stats, said he noticed an immediate increase in interest when the season began on May 5.

“On opening day we had 27 times the amount of traffic than opening day in 2019,” Kurtz said. “We’ve seen that go down, but it is still way more than the previous season. It’s still probably about 15 times more than it was last season. Initial interest may have dipped a bit, but it did not drop off as drastically as some might think.”

The increase in coverage is a big opportunity to promote the league, which is often overlooked due to the huge amount of baseball already played in the United States.

The NC Dinos have done especially well in finding new fans. Although the team is named for a Korean software company, it found instant popularity in North Carolina because it happens to share the same initials as the state. The mascot of the North Carolina team the Durham Bulls can now often be seen at Dinos games.

“The league’s been going on for about a month and a half now,” said Kurtz. “I’d say the KBO is still gathering interest around the world. But casual sports fans here in the United States may not watch all nine innings, like they did last month [when] they were so sports-starved. They are now at least aware of the KBO and have adopted a team [that they are] casually following.”

But the new fans are committed — the most common question Kurtz is asked is how fans can get KBO merchandise.

Outside of the United States and Korea, 130 other countries around the world have now broadcast KBO games.

The K League also sold broadcasting rights to 36 countries, including the BBC in Britain. The opening game was broadcast live on the BBC as well as online, with 3.4 million people watching on Twitter, according to Sports Pro Media.


While fans around the world might find themselves tuning into catch the KBO or KLPGA in the early hours of the morning or resorting to replays, home supporters are getting creative as they seek new ways to root for the teams.

Cheering from home has become the latest trend, showing live clips of fans at home on the scoreboard in the stadium, offering some encouragement to the players and entertainment for viewers. This method has seen success overseas, with the English Premier League using a similar approach through the videoconferencing program Zoom when the league began on June 17.

The KBO is taking things one step further, announcing on June 16 that it is planning to introduce drive-through cheering so fans can gather to watch games while still isolating themselves in their own vehicles.

In the KBO, the home teams still have their cheerleaders out in the stands dancing along to the team songs. With the loud music still playing, a sort of online cheering culture has evolved, but what fans really want is to be back in the stadiums rooting for their teams.

It is still unclear when the world of sports will return to normal, but one thing that is clear is that fans are desperate to get back in stadiums.

The KBL, WKBL and KOVO, which are yet to start their season, still have time to decide on an approach.

According to a source from KOVO, the one thing that won’t change is the start and end of their season. The season is expected to begin in mid-October and end at the start of April next year, with the KOVO Cup held ahead of that at the end of August. Although the season is intended to go ahead as planned, the league could cancel the cup if fans can’t attend, the source said.

As for the KBO, clubs are constantly adapting their plans as the situation changes, but any return of fans is likely to be a phased process.

But there's no reason the new systems can't stay in place as well.

“Rather than preparation [for post coronavirus] I would say it's more like a new direction for marketing,” the KBO's Ryu said. “I think we should find ways to use the new media more actively and that should be the new direction going forward.”