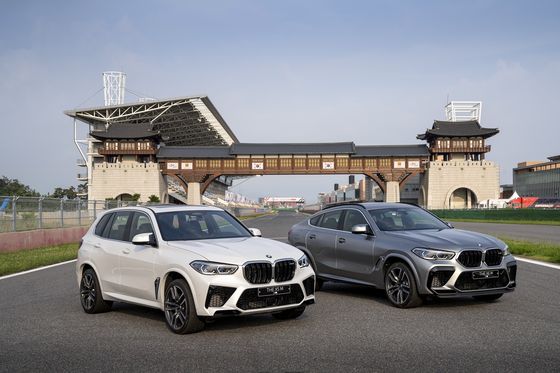 BMW Korea officially launched the new X5 M and X6 M models in Korea on Monday to complete its lineup of the X-series in Korea.

The new X5 M, which the company calls an ultra-high-performance sports activity vehicle (SAV), and the X6 M, a so-called sports activity coupe (SAC), can go from zero to 100 kilometers (62 miles) per hour in just 3.9 seconds.

4.94 meters (16.2 feet) in length, 2.015 meters in width and 1.75 meters in height, both models come with a 4.4-liter gasoline engine rated at 600 horsepower, with 76.5 kilogram-meters (553.3 pound-feet) of torque. The front bumper is designed to maximize aerodynamic and cooling performance, and a racetrack-ready cooling system regulates the engine in extreme driving environments.

Equipped with eight-speed automatic transmissions, the X5 M offers fuel efficiency of 6.7 kilometers (4.2 miles) per liter and the X6 M gets 6.8 kilometers per liter.

To mark the launch of its new M series, BMW Korea will run an online gallery on BMW Korea's social media channels and its official website from July 7 to show the vehicles.