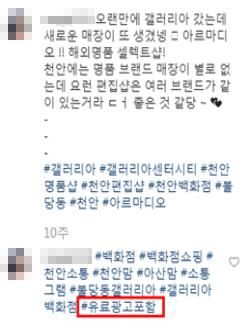 A sponsored social media post that reveals its sponsorship in the comments. [FAIR TRADE COMMISSION]


Product reviews on social media sponsored by companies will have to be more upfront about it.


On YouTube videos in particular, sponsorships will have to be 'fessed up to at the beginning of videos, midway through, and at the end.

On Tuesday, the Fair Trade Commission (FTC) introduced guidelines on sponsored postings on social media that will be implemented Sept. 1.

The agency said there has been a rise in misleading reviews that don't admit sponsorships.

Under the new guidelines, so-called online "influencers" have to clearly state if they have been paid by companies.

On Instagram or Twitter, the fact that a post has been sponsored by a company must be stated at the beginning of the post, rather than waiting until the middle or even way down in the comments section.


If pictures are posted, the picture must contain some indication of the sponsorship. A sponsor's hashtag must be the first one used.

When the posting is in Korean, the notification of sponsorship should be in Korean as well. Switching to a foreign language to write “Thanks to” or “Ambassador” is not acceptable since a Korean reader may not know English.

On streaming videos on YouTube, the video must clearly describe sponsorships in the beginning, middle and end. If the admission is done in a caption, it must be distinct from the background and not be hard to read. If it's done by voice, it must be audible and not rushed.

The FTC analyzed 582 postings by top 60 so-called influencers between October and November last year, and only 174 posts, or 30 percent, admitted they were sponsored.

Even in the 174 posts, many failed to clearly state that they were paid ads.

The government has been increasing its investigations into businesses that are making profits through such social media platforms.

The social media market is estimated to be around 20 trillion won in Korea, which is roughly 18 percent of the 11-billion-won online shopping market.

Despite its rapid expansion and influence, some businesses were found to be deceiving consumers, while others have avoided paying taxes.

On Sunday, the FTC fined seven social media businesses including a popular fashion and beauty company, Imvely, which was at the center of a controversy involving sales of moldy pumpkin juice, for intentionally hiding negative reviews by its customers.