The Korean Intellectual Property Office (KIPO) is taking measures to crack down on the sale of counterfeit luxury items on social media platforms, as the number of cases involving these products has shot up.

KIPO on Wednesday announced measures against the distribution of counterfeit goods through online platforms. According to the office, reports of online counterfeit products rose 204.4 percent on year from January to August.

“Due to the coronavirus spread, online shopping transactions soared, and reports of the sale of counterfeit products online have also skyrocketed,” said Chung Kee-hyun, the director of the intellectual property investigation division at KIPO. Statistics Korea said the turnover of online shopping malls rose from 86.6 trillion won ($75.7 billion) in 2019 January-August period to 101.8 trillion won over the same period this year. 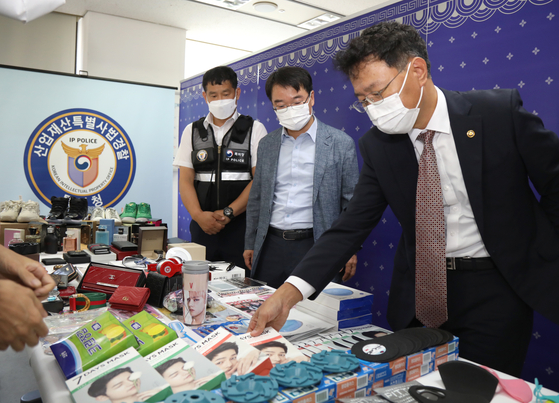 Kim Yong-rae, the commissioner of the Korean Intellectual Property Office, examines the representative cases of counterfeit goods at the government complex in Daejeon. The examination took place in September in light of the 10th anniversary of the office of the special judiciary police under KIPO.


In August, a family of four was arrested for promoting and selling on social media channels 26,000 counterfeit luxury items, including handbags, that would be worth 62.5 billion won if they were real. The main culprits, the mother and first daughter, were imprisoned for violating the Trademark Act, and the father and younger daughter were charged without detention. They sent the products from an undisclosed location but claimed they were based in Ulsan. 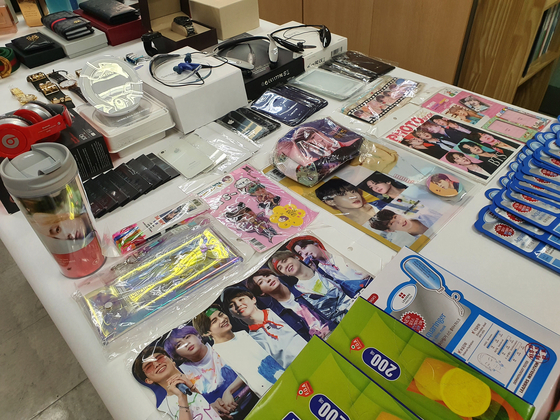 
For cases that are unresolved and put under surveillance by KIPO, the personnel dedicated to the crackdown have been deleting the online posts and shutting websites. KIPO is planning to hire eight employees that specialize in online crackdowns and eight for the offline offenses.

“KIPO is planning to execute expanded measures centered around areas that threaten the well-being of citizens and restrict sales by continuing to delete sales posts and shut down websites,” said Jung.

KIPO is planning to shut down the distribution channels for counterfeit goods by intensifying crackdowns by the special judicial police in the short term and enhancing investigation measures via digital forensics and stronger investigative personnel.

KIPO said it will also collaborate with trademark holders and provide the assessment results of suspected counterfeit items of various brands, so that victims can directly request compensation from the sellers. In order to strengthen the compensation system, KIPO will extend the measures to cover e-commerce websites to ensure that they compensate the victims who bought the goods without knowing they are fake and request reimbursement afterward.

Government officials are also pushing ahead with amendments to laws related to trademarks. In September, Rep. Kim Kyung-man of the Democratic Party proposed an amendment to the Trademark Act aimed at bolstering the responsibility of e-commerce companies in preventing the distribution of counterfeit goods.

“The jump in the distribution of counterfeit goods is expected to continue even after the coronavirus pandemic subsides,” said KIPO Commissioner Kim Yong-rae. “KIPO will establish order for competition in online transactions by improving investigation capabilities and expanding personnel in preparation for the digitization and sophistication of intellectual property crimes.”