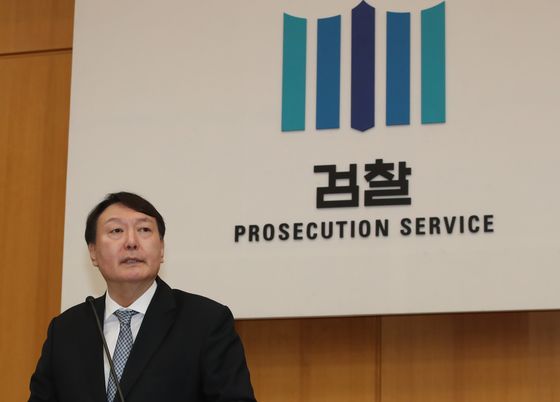 In this file photo, Prosecutor General Yoon Seok-youl delivers the opening remarks during a meeting with the heads of district prosecutors' offices on Feb. 10. [YONHAP]


Prosecutor General Yoon Seok-youl appears to have dodged a bullet for now, as the leader of the ruling party ordered its lawmakers to stop attacking the chief prosecutor.

Chairman Lee Hae-chan of the Democratic Party (DP) said during a Supreme Council meeting on Monday that the party must not criticize Yoon for his disagreements with the Moon Jae-in administration about some politically volatile investigations. “We must not say anything,” Lee said.

“We must not give the impression to the people that we are pressuring Yoon to step down,” Lee said. “Party members must not even mention his name publicly.”

Lee also told the DP leaders that the party must use official processes, such as the Legislation and Judiciary Committee of the National Assembly, to address any issues concerning the prosecution.

The party chairman was responding to lawmakers putting increasing pressure on Yoon to resign for his continuing spat with Justice Minister Choo Mi-ae. “If I were him, I would have stepped down already,” Rep. Sul Hoon, a member of the Supreme Council, said last week.

“There is only one person who can tell him to step down. That is the president,” Rep. Park Beom-kye of the DP said. “There is no need for us to waste our energy. Yoon is also not someone who will step down.”

It remains to be seen how long the ceasefire will last. After the prosecution investigated former Justice Minister Cho Kuk and his family and indicted them last year, the DP lawmakers repeatedly demanded Yoon’s resignation.

The friction between Yoon and Choo reached a new peak last week amid disagreements over an ongoing investigation into the prosecutors’ handling of a 2010 corruption probe into former Prime Minister Han Myeong-sook. Yoon offered a concession Sunday and accepted Choo’s demand that a more powerful, independent inspector from the Supreme Prosecutors’ Office will investigate the prosecutors suspected of having coerced a key witness to testify against Han.

President Moon also told Yoon and Choo to stop fighting and cooperate during an anti-corruption policy meeting on Monday.

While Yoon and Choo avoided a war for now, sources in the law community said the rift will resume in July, when a routine reshuffle is scheduled for the prosecution.

When Choo reassigned senior prosecutors after taking office in January, Yoon’s proposal to keep his confidants in the Supreme Prosecutors’ Office was largely ignored. Many of Yoon’s associates were assigned to less important posts, and Choo described it as “normalization of abnormal.”

Concerns have also grown that Choo violated the independence of the prosecution by pressuring Yoon to assign the internal probe to the inspector, appointed by her predecessor Cho.

“Yoon did not accept Choo’s order fully but it can set a bad precedent in the scope of the justice minister’s power to control an investigation,” said a prosecutor-turned lawyer. “I am worried that it could become grounds for the justice minister will make specific orders in specific cases.”