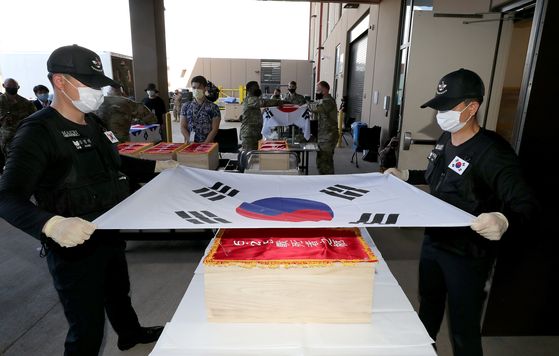 South Korean soldiers hold the country's national flag over a box containing the remains of fallen soldiers from the Korean War returned to the South on Wednesday. [NEWS1]


The remains of more than a hundred South Koreans who fell in battle in North Korean territory during the 1950-53 Korean War have returned home, 70 years later.

South Korea’s Ministry of National Defense and the U.S. Defense POW/MIA Accounting Agency, under the Department of Defense, held a ceremony at Pearl Harbor in Hawaii on Wednesday to hand over the remains of 147 South Korean soldiers to Seoul.

The remains received by South Korea on Wednesday belong to soldiers who died fighting North Korean and Chinese troops at Kaechon, South Pyongan Province; Unsan, North Pyongan Province; and the Battle of the Chosin Reservoir in South Hamgyong Province.

They were part of the remains excavated by North Korea between 1990 and 1994, handed over to the United States in 208 boxes after the first U.S.-North Korea summit at Singapore in June 2018.

The remains of 92 South Korean soldiers were handed over to Seoul by the United States in three earlier batches. The 147 soldiers' remains repatriated on Wednesday were identified in a second round of joint examinations conducted by South Korea and the United States of 55 of the boxes. 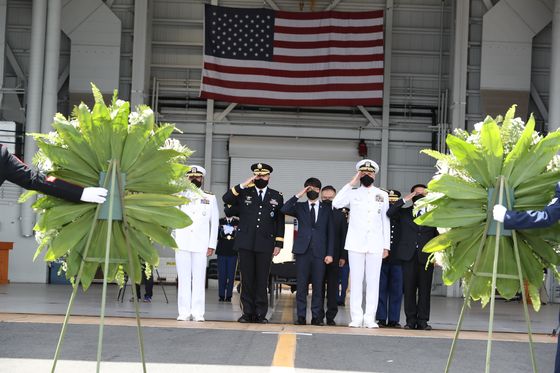 South Korean and U.S. defense and military officials salute the remains of fallen South Korean troops handed off to Seoul in a ceremony at Hawaii on Wednesday. [MINISTRY OF NATIONAL DEFENSE]


In a ceremonial gesture marking the handover, two U.S. soldiers removed the stars-and-stripes from a box containing the remains, which was then wrapped with the flag of the United Nations — under which the allies fought North Korea during the war — then wrapped again with South Korea’s national flag.

“The transfer of remains that takes place on the 70th anniversary of the outbreak of the June 25 [Korean] War will strengthen the alliance between South Korea and the United States,” Vice Minister Park said in his address.

“This is the result of combined efforts by South Korea and the United States that shows the nation will take full responsibility to honor those who have sacrificed themselves for the nation.”


The KC-330 tanker plane carrying the remains was due to arrive in Seoul at 4:50 p.m. Wednesday after being escorted by six fighter jets of the South Korean Air Force.

The Ministry of National Defense plans to identify each of the soldiers whose remains were received by comparing domestic records of the fallen and those from the U.S. Army’s 7th, 2nd and 25th Infantry Divisions.