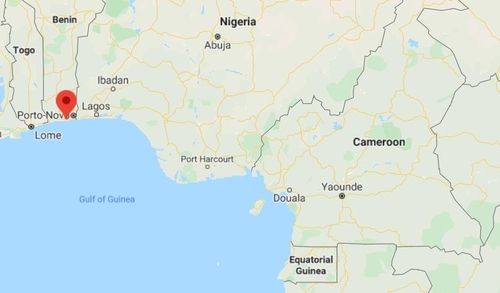 A Google Earth capture shows the Gulf of Guinea. Five Korean sailors were kidnapped off the coast of the West African country of Benin Wednesday. [YONHAP]

Five South Korean sailors aboard a tuna boat were kidnapped by an unidentified armed group in waters off the southern coast of Benin in West Africa Wednesday.

A total of six crewmen, including a Ghanaian sailor, were abducted at around 3:40 p.m. local time some 60 nautical miles off the coast of Benin after the group attacked the 994-ton ship, the Panofi Frontier, confirmed the Korean Ministry of Foreign Affairs Thursday.

The group, suspected to be pirates armed with guns, took off with the six hostages on a speed boat and escaped eastward toward Nigeria. Their exact identities and whereabouts have yet to be confirmed, said the ministry.

There was a total of 30 crew members aboard the Ghana-registered Panofi Frontier. The remaining 24 Ghanaian sailors were headed back to Ghana on the fishing vessel.

According to Fio Marine, the Busan-based company that dispatched the Korean sailors, the kidnapped crewmen included the 61-year-old captain of the vessel. The Korean crewmen were in their 50s and 60s. Three men came from Busan, one from Incheon and one from Gwangju.

A Fio Marine spokesperson said, “We have had a contract with Panofi since 2012 and have been tasked with dispatching sailors. The kidnapped five crewmen are ranking sailors with various technical licenses and long experience.”

Panofi, a joint venture company founded in 2002 and based in Tema, Ghana, owns the fishing vessel.

The Korean Foreign Ministry said it is working closely with the authorities of relevant countries to enable the speedy release of the kidnapped crewmen.

The Gulf of Guinea, which runs some 3,700 miles along the West African coast, has seen a large spike in maritime kidnappings over the past year.

The International Chamber of Commerce’s International Maritime Bureau in a January report said there was “an unprecedented rise” in kidnappings in the Gulf of Guinea. Some 121 crew members were kidnapped in 2019, a 50 percent increase compared to the previous year. This was over 90 percent of the global kidnappings reported at sea, it added.

The Korean Navy’s Cheonghae Unit has been deployed on an antipiracy mission in the Gulf of Aden off the coast of Somalia to protect vessels in the region since 2009. Piracy on the high seas of Somalia has plummeted over the past decade, while the Gulf of Guinea, where a large volume of international shipping passes, has emerged as a global piracy hot spot.