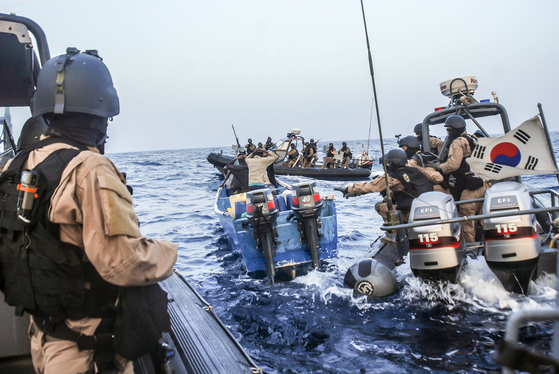 Members of Korean Navy's Cheonghae unit confronting an unidentified armed group in the waters off a coast of Africa in March 2019. [NEWS1]

Four Koreans abducted in the Gulf of Guinea in Western Africa two months ago were released Sunday, the Foreign Ministry announced.

“We had four nationals captured while fishing in the waters near the Gulf of Guinea on June 1,” the Ministry of Foreign Affairs announced Monday. “They were released on Aug. 1 – all are in good health and they will be on a flight to Korea soon.”

The kidnapping was a second involving Korean nationals in the same waters within two weeks, after the Korean captain of a fishing boat was captured on May 20. He was sailing in waters off Ghana with three Chinese crew members and one Russian crew member. All were captured.

“The Korean captain was also released, as well as the other crew members, on June 29,” the ministry said. “This concludes the cases of kidnapped Korean nationals in the Gulf of Guinea this year.”

The release of the Korean captain was not announced immediately, because negotiations for the four other Korean nationals were ongoing, according to a source.

“The Korean government does not negotiate with the kidnappers directly,” the ministry said. “We communicated closely with the vessels’ companies in the negotiation process.”

Koreans have been frequent targets in the waters off the western coast of Africa in recent years.

Last year, one Korean crew member was captured in the same waters in May; five Koreans were abducted in June; and two Koreans were grabbed in August. All were released by November 2020.

They were among 135 crew members worldwide who were captured by unidentified armed groups or pirate organizations last year, of whom 130, or 96.3 percent, were captured in the waters off the coast of Western Africa, according to the Ministry of Oceans and Fisheries. The number of sailors captured in these waters have more than doubled from 2016, when 62 were reported to have been kidnapped, according to the ministry.

“We have constantly asked our citizens not to enter these waters, as they are a high-risk area,” the Foreign Ministry said in its statement on Monday.

Korea is at the moment amending a law in a way that will ban Korean crew members from entering high-risk waters, which include the waters off Nigeria, Benin, Togo and Cameron, all part of the Gulf of Guinea. The amendment to the law, the Act on the Prevention of Damage to Ships, etc., on International Voyages from Piracy, was passed by the National Assembly on July 23. It is scheduled to go into effect in February 2022.

“The Korean government will continue to work closely with countries in the Gulf of Guinea and with the International Maritime Organization and G7 Group of Friends of the Gulf of Guinea to fight piracy,” the ministry said. “But there is only so much that a government can do, we ask each and every citizen and the companies involved to please cooperate.”

There were several cases of abductions of Korean nationals in the waters off Somalia in Eastern Africa from 2007 to 2011, including the case of four Koreans captured by pirates in April 2011, who were released after a year and seven months, according to the Foreign Ministry.

According to the Oceans Ministry, abductions in the waters off Somalia have dropped to zero since 2019.

“We believe the dispatch of our Cheonghae unit in the waters off Somalia has contributed to this,” the ministry said in a statement in February.

The unit, established in 2009 to conduct peacekeeping and anti-piracy missions in the Gulf of Aden in the eastern coast of Africa, was dispatched to the Gulf of Guinea in June, according to the Defense Ministry, to provide on-site support for the kidnappings.

The unit recently made headlines with a cluster of Covid-19 infections.

Of the 300 members of the unit on board the Munmu the Great destroyer in Gulf of Aden, 272 were infected with Covid-19 as of last weekend.

The mission was called off and all of the infected were flown back to Korea. As of last Saturday, 265 were reported to have recovered. The Korean military was heavily criticized for failing to protect the crew from infection.