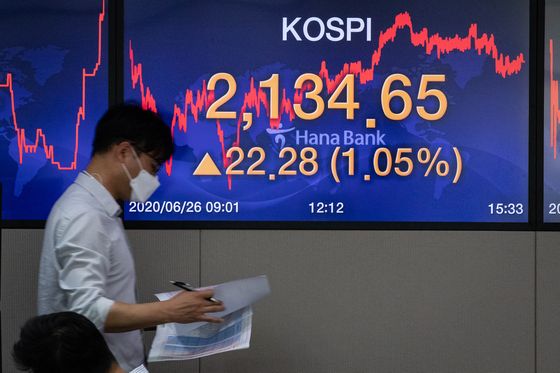 A screen shows the closing numbers for the Kospi in a trading room at Hana Bank in Jung-district, central Seoul, Thursday. [NEWS1]

Foreigners and individuals scooped up a net 61.5 billion won and 106.2 billion won, respectively, while institutions offloaded a net 163.7 billion won.

The index opened sharply higher, tracking overnight Wall Street gains after banking regulators unveiled that they will make business easier for large lenders despite worries over a surge in new Covid-19 cases.

The United States set a new record for a one-day increase in coronavirus cases, with Texas deciding to pause its reopening.

The Kospi continued to build up gains on the back of a rise in major technology shares.