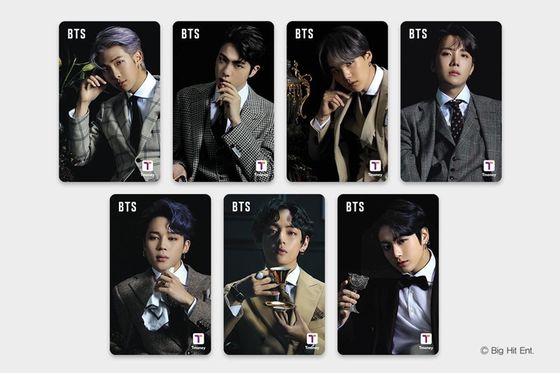 There are seven different cards with photos of each member of the group dressed in outfits from BTS’s fourth full-length album “Map of the Soul: 7” released in February. The album made it to the Billboard top 200 list in April.

T-money is a rechargeable card mainly used for public transport, but can also be used to buy things at partnering stores like the CU chain.

Customers who buy things at CU stores using the new T-money cards will receive reward points equivalent to 2 percent of the purchase price. Additional T-mileage points will also be given to people who register on T-money's official home page.

BGF retail has been partnering with T-money since 2017 to release limited edition BTS T-money cards every year. Last year, all the cards sold out the first day.

Sales of T-money cards at CU convenience stores have seen double-digit growth for the past three years. In 2019, year-on-year sales increased by more than 13 percent.

“Our BTS T-money cards created buzz both offline and online for every release due to their unique design and practicality,” said Kim Il-du, a manager in the living goods division at BGF Retail. "We will put our best efforts into coming up with more fun and unique products for our customers."