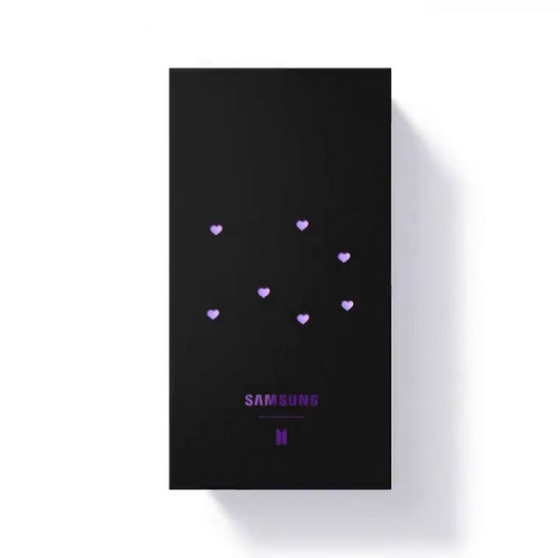 The box for the Samsung Electronics BTS smartphone. [SCREEN CAPTURE]


Samsung Electronics is releasing a smartphone in partnership with BTS next month. Aimed at the more than 2 million BTS fans, known as ARMY, the tentatively named Galaxy BTS edition will be released in purple, the color that symbolizes BTS.


Samsung Electronics released a video of the Galaxy BTS edition on its Twitter and Facebook accounts last week that featured seven purple hearts — one for each of the seven BTS members — and a black box with the BTS logo.

"Find your purple on July 9,” the video said. July 9 is celebrated as the birthday of ARMY.

Samsung Electronics, which announced the new model on its social media accounts, will take orders for its BTS edition June 19 to July 5. The company did not disclose the smartphone model for the BTS edition yet, but telecom industry observers assume it to be the Galaxy S20. The S20 comes in cosmic black, cosmic gray, cloud blue, cloud pink, aura blue and aura red, but it has never released in purple. As the BTS version will be available in limited quantities, it will only be available at Samsung stores, and not from mobile carriers.

Considering the size of the BTS fan base, the secondary market for the BTS edition is seen as being strong. Due to the lack of supply, the limited edition might trade at a premium to the list price. Samsung's foldable phone Z Flip's Tom Brown edition, which was released in February, was so popular that access to Samsung's online shop was delayed on the first day of sales, and the limited edition traded for millions of won in the secondary market.

Smartphone sales have been weak due to the coronavirus outbreak, and Galaxy S20 sales were only 60 to 70 percent of the previous model. The company’s BTS Edition could help revitalize the sluggish smartphone market.

"Limited editions account for only a small portion of overall demand," a mobile telecommunication industry official said. "But since BTS has a huge fan base, it will be able to give some vitality to the market."