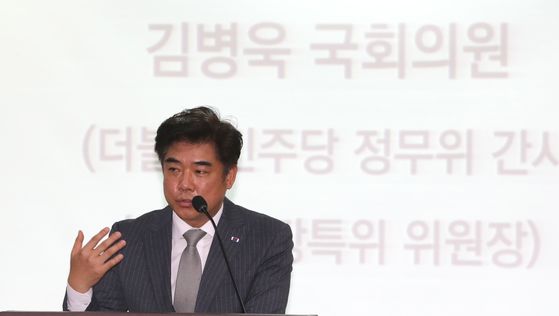 Rep. Kim Byung-wook of the ruling Democratic Party speaks during a seminar designed to discuss the government's new tax policy on June 25 at the National Assembly in Yeouido, western Seoul.


The government's plan to create a new tax on investment profits while reducing securities transaction fees is expected to face heated debate during an upcoming public hearing.

The Finance Ministry will hold a hearing July 7 to discuss the scope and details of the tax plan, which calls for levying a 20 percent tax on profits exceeding 20 million won ($16,600). It would go into effect in 2023.

Investments of at least 300 million won would be subject to a 25 percent rate on the profits.

All investment instruments would be subject to the new tax, including stocks, bonds, derivative securities and funds.

The proposal, announced last week, already faces fierce criticism, and the hearing is expected to spark intense debate over the proposed tax rates and targets.

A petition on the Blue House website calling for the cancellation of the new tax scheme had gathered more than 45,000 signatures as of Sunday.

Currently, individual investors face taxes on their profits only if they own at least 1 billion won worth of a single stock.

At the same time, the ministry has proposed cutting the securities transaction tax from the current rate of 0.25 percent to 0.23 percent in 2022. It would further lower the rate to 0.15 percent in 2023.

Still, both the governing Democratic Party and main opposition United Future Party demanded that the transaction tax be scrapped altogether.

Democratic Party Rep. Kim Byung-wook accused the proposal of falling into double taxation, in which two income taxes would target the same source of income.

The Finance Ministry, however, argued that maintaining a transaction tax reduces the likelihood of excessive high-frequency trading, wherein computer programs transact large numbers of trades in fractions of a second and can exacerbate market volatility.

The ministry also said that it would deduct the transaction tax for an estimated 300,000 investors who will be subject to the new capital gains tax, thereby avoiding the issue of double taxation.

Skeptics of lowering the transaction fees have noted that the government currently brings in tax revenues that amount to more than 4 trillion won per year.

The new tax is expected to raise 2.1 trillion won in 2023. Lowering the transaction tax will cost the government an estimated 1.9 trillion won that year.

Critics have also argued that the new tax policy will prompt local investors to pivot to markets in other countries in search of lower taxation. In response, the ministry noted that trading overseas stocks comes with higher fees.