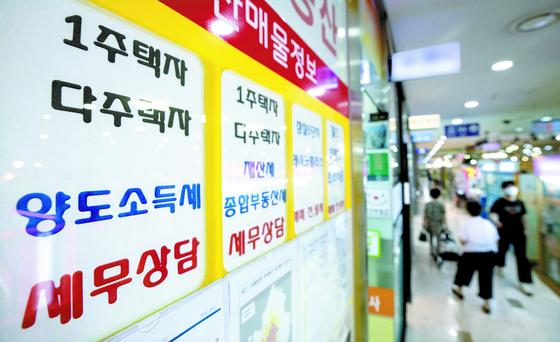 Real estate agents provide consultation services for tax reductions as homeowners are concerned about rise in the comprehensive real estate tax once new real estate bills get passed by the National Assembly. [News 1]


Couples are on edge, with some considering divorce, as new taxes may soon be passed on property.

A couple in their 60s, who wished to remain anonymous, said divorce will be on the table if the new capital gains tax and other related taxes become law, which together take the maximum rate for gains on the sale of a property to 52 percent. They would rather receive benefits for owning one house per household than pay half of the money gained from real estate investment as tax.

“An array of societal side effects can occur if the government imposes excessive legal restrictions on the housing market,” said Suh Yi-jong, a sociology professor at Seoul National University’s.

Yang Gyeong-seop, a tax accountant at Onse, a tax consulting firm based in Seoul, created a simulation to calculate the change in the tax burden if a couple owning two homes split. Yang assumed the husband owns a 76 square-meter (819 square-foot) Hangang Apartment in Jamwon, Seocho District, and the wife owns a 84-square-meter unit at Gyeonghui Palace Xi Highend Condos in Hongpa-dong, Jongno District. If the couple stays together, the real estate tax will rise by 50 percent next year to 13.7 million won ($11,400) from 9.1 million won this year. Estimated increases in the comprehensive real estate as a result of the July 10 real estate measure and a 10 percent increase in the government assessed values for next year have been applied to the calculation.

People are urged to sell their property to reduce taxes next year. If the husband in this particular scenario sells his apartment, which he bought for 400 million won 18 years ago, for 1.6 billion won before May 2021, the capital gains tax will total 646 million won. The profit gained from the sale after tax is 554 million won, less than half of the change in price. If the couple divorces, the capital gains tax on the sale of the Hangang Apartment would be reduced to 31.1 million won, a 95 percent decrease. The husband can now profit from most of the price change, which is about 1.2 billion won, as he is subject to the financial benefit that comes from being a single homeowner.

The dilemma rises not just for married couples. Those who live at the home of their parents while maintaining their own house for child-rearing purposes are also considered to own two houses per household. If the person lived separately from their parents, the apartment that he or she owns will be taxed on the amount exceeding 900 million in terms of the government assessed value. But if that person lives with the parents and therefore is considered to own two apartments, he or she is taxed from the amount exceeding 600 million won. If the government assessed value goes up by 10 percent along with the comprehensive real estate tax rate, next year’s property tax will be 4.78 million won, more than 2 million won higher than when living separately.

“For tax reduction purposes, it is better to live apart from your children if they are above 30 years old,” said Yang.

Exceptions exist. If a household owns two homes in order to take care of their sick parents who are 60 or older, then they do not fall under the multiple homeowner category for 10 years.

There are also couples who delay marriage registration due to real estate issues. The basic condition for the government’s special provisions for newly-weds, which makes it easier to buy property, is not owning a home during the first seven years of marriage. This encourages couples to avoid the paperwork for as long as possible so they can maintain their special benefits in the lottery.

Tax accountants say that rich newlywed couples with one home per person should not rush to get registered as a married couple. The tax law states that couples selling a property in the first five years of marriage are exempt from the capital gains tax if they sell one of their properties. Some couples postpone their registration to delay the selling of their property as they expect the prices to rise.