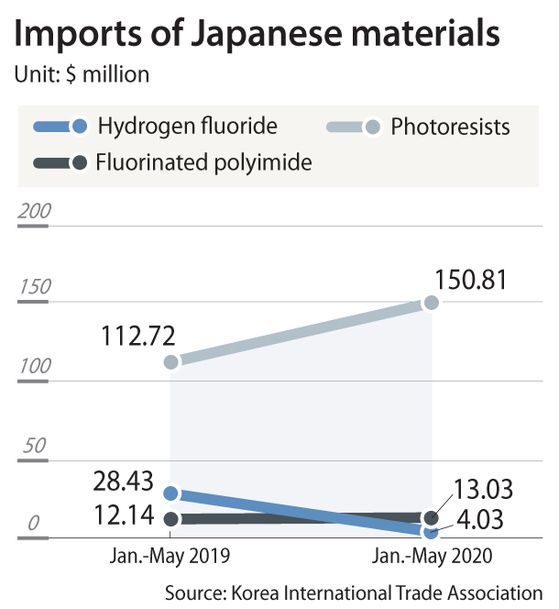 Japan’s restrictions on exports to Korea of three essential materials for chip and display production in July 2019 turned out to not be as disruptive as first thought.

Korea’s main chip and display producers have not reported any production setbacks since the restrictions began. Over the past year, some local suppliers have even succeeded in developing products nearing the quality of those previously imported from Japan.

Despite the achievements, tech and trade experts say recovering the value chain with Japan in regards to chip and display production is still a necessary task and a much more efficient option than completely localizing supply for the three effected products — fluoride hydrogen, photoresists and fluorinated polyimide.

Trade figures show that Korea hasn't been completely successful in finding domestic alternatives over the past year. The positive outcome was restricted to hydrogen fluoride only — a chemical used in gas and liquid form to etch and clean semiconductor surfaces.

Hydrogen Fluoride imports from Japan between January and May plummeted 85.8 percent on year to $4.03 million, reducing Korea’s dependence on Japan to 12.3 percent, down from 43.9 percent before the restrictions took place.

Imports of photoresists and fluorinated polyimide, on the other hand, increased over the last year, despite export procedures in Japan becoming considerably more lengthy following the government’s decision.

Imports of photoresists, essential in manufacturing high-performance chips, from Japan actually increased 33.8 percent on year to $150.8 million between January and May, although dependence on Japan has fallen from 91.9 percent to 88.6 percent. Imports of fluorine polyimide, a material used in display production, also increased 7.4 percent on year to $13.03 million.

A score of Korean companies have started developing their own variations of the two products and are in the process of developing or testing them, but none have been able to take the place of Japanese suppliers. Major clients like Samsung Electronics and SK hynix that require sophisticated materials to produce high-performance chips are still reliant on imports.

“The decline of fluoride hydrogen imports was indeed possible thanks to localization, but this isn’t the outcome of a recent effort. There was a Korean company that was already developing the technology before the restrictions. Without it, it would not have been possible,” said Park Jea-geun, electronic engineering professor at Hanyang University and head of the Korean Society of Semiconductor & Display Technology, during a Monday seminar hosted by the Federation of Korean Industries (FKI) in Yeouido, western Seoul.

“It’s wrong to believe that we can tail Japanese companies in the near future. We’re talking about decades-old, global No. 1 players that make trillions of won per year. Their level of technology is immense. Narrowing that gap in a year is impossible.”

According to Park’s analysis, there isn't a big difference between the percentage of revenue spent on research and development (R&D) in the two countries — 2.6 percent in Korea and 3.8 percent in Japan — but there is a huge different in the amount of revenue. As such, the average R&D investment per company was tenfold higher at 153.4 billion won in Japan compared to Korea’s 13 billion won.

Lee Hong-bae, a professor of business and economics at Dong-eui University, agreed that localization isn’t the ultimate answer.

“It takes R&D costs and pulls down profits for the companies. The government also has to pour in big budgets that could have been used for other purposes. Betting everything on localization is not a smart move. If there’s a pattern that maximizes profits, that’s the direction this industry should be heading in,” he said.

According to Lee’s analysis, the value chain between Korea and Japan over high-tech materials was creating $81.1 billion of economic value per year, including corporate profits and hires. Giving up that established connection built over the past few decades would mean losses for both sides.

Experts and academics at the seminar also pointed out that halting trade and cutting ties for chip and display materials can come back as bigger losses in the future, especially at a time when the United States and China are fighting over leadership in technology.

“At the moment, an immediate way to maintain tech leadership against China would be diversifying suppliers from other foreign companies or persuading them to establish domestic factories like DuPont’s EUV photoresist factory in Korea,” said Park.

In the past year, the Japanese government’s decision has also resulted in negative blows to suppliers in the country. Stella Chemifa, the world’s leading manufacturer for fluoride hydrogen, saw its 2019 net profit fall 18 percent and revenue slump 12 percent on year.

“Companies in both countries are now facing a situation where they have to resolve this issue that started off from political reasons. I think it’s time businesses start to consider what they can do on their own and in which parts they have to work together with the government,” said Horiyama Akiko, the Seoul bureau chief of Mainichi Shimbun.

Exports drop for the first time in nearly two years