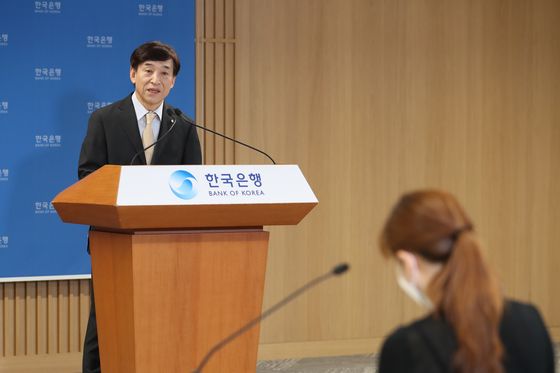 The governor of Bank of Korea, Lee Ju-yeol gives a briefing at the central bank in Jung-District, central Seoul. [BANK OF KOREA]


An unprecedented maneuver for adding dollars to the domestic market was announced by the Bank of Korea and the Ministry of Finance on Tuesday.

To ensure liquidity, the central bank will offer the U.S. currency from the country's foreign reserves in exchange for U.S. Treasuries in a repurchase agreement never before tried in Korea. The facility is being made available to ward off currency instability resulting from the coronavirus pandemic.

The program will not be limited to commercial banks. Insurers and brokerages will also be able to participate.

“The Bank of Korea and the Finance Ministry have been trying to come up with a new policy tool to stabilize the country’s foreign currency sector,” the bank said in a release Tuesday.

The central bank will be the purchaser of the Treasuries.

According to the Bank of Korea, the exercise will have no effect on Korea's foreign exchange reserve balance, as the dollars are exchanged for bonds.

If the program is activated, the bank will start by purchasing U.S. Treasuries held by local financial companies. The bank said it will expand the scope of the bonds it purchases by ensuring that the repurchase agreement includes instruments such as U.S. agency securities, depending on market conditions.

As of February, local insurers and brokerage houses held $23.3 billion worth of U.S. Treasuries and U.S. agency securities, according to the bank.

Previously, the central bank provided dollars to the local market through a $60 billion currency swap signed with the Federal Reserve in March. Insurance companies and brokerage houses were not eligible to apply for the program.

A total of $19.8 billion of the swap line has been utilized so far. With sign of economic recovery in Korea, the demand for dollars has decreased, and the central bank temporarily suspended the program as of May.

The exact timeline for the new repurchase agreement hasn’t been decided. If it is seen as unnecessary, the new program may not be activated at all, according to the bank.

The bank said it will finish establishing the system needed for the program’s operation by the end of September.