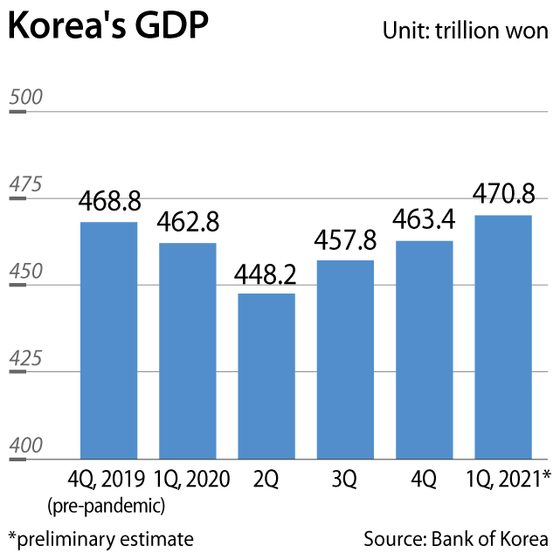 According to preliminary data from the Bank of Korea (BOK) on Tuesday, the country's real GDP, an inflation-adjusted GDP measure, reached 470.8 trillion won ($423.2 billion) in the first quarter, 1.6 percent increase from the previous quarter and 1.8 percent increase year-on-year.

For the first time, it exceeded its peak before the pandemic, which was in the fourth quarter of 2019.

Compared to the fourth quarter of 2019, the GDP was 0.4 percent higher.

The growth figures beat projections by analysts. The market consensus was that first quarter GDP would grow by 1 percent on quarter and 1.1 percent on year.

The major driver was a recovery of the domestic economy.

This is different from past quarters when exports drove GDP growth and the domestic economy dragged it down.

Improvement in the domestic economy was largely due to some recovery in private consumption and investment in infrastructure development.

"With some easing in social distancing measures in February, we think there was increased consumption in the face-to-face services sector," said Park Yang-su, director general of the economic statistics department at the BOK in an online press briefing held Tuesday.

On the negative contribution of net exports to GDP growth, Park said, "We can't say it is all that bad considering it was largely due to increased imports following recovery in consumption and investment in the domestic economy."

According to the central bank, exports increased 1.9 percent on quarter mostly due to strong exports of cars and mobile phones. Imports grew at a faster pace, 2.4 percent on quarter, on strong domestic demand for machinery and steel products.

While the central bank projected roughly 3 percent growth in Korea's economy in 2021, analysts say the country is likely to easily outpace that projection thanks to strong growth reported in the first quarter.

If the country is able to achieve at least 0.5 percent GDP growth in the remaining three quarters, that would add up to 3.6 percent annual GDP growth. BOK Gov. Lee Ju-yeol had also said during a press briefing earlier this month that he is positive that Korea's economic growth rate will easily reach over 3 percent and likely reach the mid-3 percent level.

This aligns with projections by global organizations.

The International Monetary Fund last month raised its projection for Korea's economic growth this year to 3.6 percent from 3.1 percent predicted in January. The Organization for Economic Cooperation and Development (OECD) raised its projection to 3.3 percent last month, up 0.5 percentage points from a forecast made last December.

On strong quarterly growth, President Moon Jae-in said Tuesday at a Blue House meeting that this is a sign "Korea's economy has returned to normalcy."

Despite positive figures reported, small business operators and the self-employed are still struggling. Despite four rounds of cash handouts by the government, spending by the private sector in the first quarter was 5.5 percent below spending in the fourth quarter of 2019.

"Private consumption rebounded 1.1 percent quarter-on-quarter in the first quarter, but only after falling 1.5 percent in the fourth quarter of 2020," said James Lee, a chief economist at HSBC. "Looking ahead, the growth will be determined by how much of the pent-up demand created in the pandemic is spent."

Lee added that "data so far suggests that consumers are unlikely to unleash the large pool of savings accumulated last year."

Still some expect the Korean economy could grow by around 4 percent this year.

"The country is likely to see over 1 percent growth in the second quarter considering major drivers of GDP growth in the first quarter -- favorable exports, expanded investment in infrastructure and easing in social distancing -- are likely to remain in the second quarter," said Park Sang-hyun, a research fellow at Hi Investment & Securities. "Considering such growth factors, the country will likely see over 4 percent growth in GDP this year."

Economy grows 3.1 percent on year in the first quarter