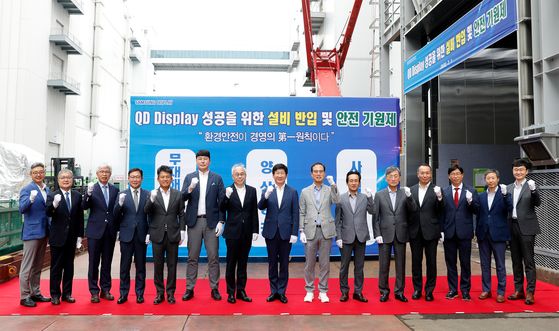 The display maker said Wednesday that it transported the first batch of QD equipment including vapor deposition machines to a production line at its plant in Asan, South Chungcheong, part of which was previously used to manufacture LCDs.

The equipment setup process will take place throughout the year to start mass-production of QD panels next year, according to Samsung Display in a statement.

The switch came after the manufacturer announced its plan to halt production of LCD panels next year as the market is dominated by cut-price Chinese competition.

As a part of the shift, Samsung Display said last year that it will invest 13 trillion won ($10.8 billion) on upgrading its facilities to advance into QD-based and organic light-emitting diode (OLED) panels.

“Despite the coronavirus pandemic, a close alliance with global partners allowed us to proceed with our QD investments as planned,” said Choi Joo-sun, chief of the large-size display unit at Samsung Display, during a ceremony to celebrate the arrival of the equipment on Wednesday.

Local media outlets reported that the display unit has recently put an eighth generation LCD production line at the Asan plant up for sale, although it declined to comment on the report.

The production line was shut down last year in response to a slump in orders for LCD screens.

A source in the display industry, who requested anonymity, said that the company is on track to sell off the LCD production facilities in both Korea and China.

“Samsung Display manufactures LCDs in Asan and Suzhou, China,” the source said. “Following the plan, the unit is in the process of selling the LCD production lines.”

“Still, the sale process in China will likely take more time since it needs to adjust opinions with the Chinese authorities and other parties.”