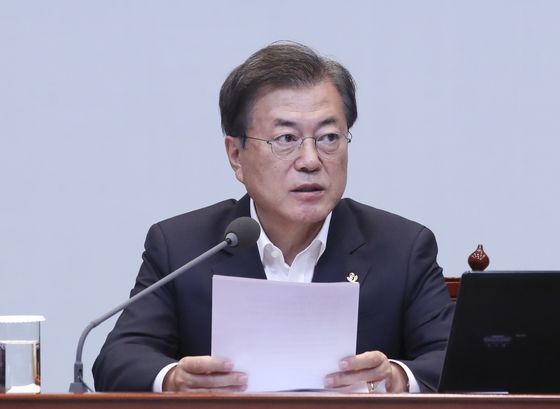 
Jolted by public scorn for the government’s real estate policies, President Moon Jae-in on Thursday urgently summoned the land minister to discuss them.

The Blue House also ordered presidential aides to sell any second homes they own, which had been a lightning rod issue for public displeasure.

Presidential Spokesman Kang Min-seok said Minister of Land, Infrastructure and Transport Kim Hyun-mee was summoned to give an unscheduled briefing to Moon at 4 p.m.

Moon also said it was his top priority to pass a bill in the National Assembly increasing the comprehensive real estate tax to put more pressure on multiple home owners and possibly bring real estate prices down. A plan to hike the tax was one of the government’s measures announced on Dec. 16, 2019, but the bill was not passed by the last National Assembly.

Moon also told Kim to create plans to increase supplies. As of Thursday, the government announced plans to build 770,000 new apartments in the capital region, but Moon said more are needed.

On Dec. 16, 2019, presidential Chief of Staff Noh Young-min told Blue House officials that if they owned more than two residences in areas deemed speculative or overheated, they should keep one and sell the rest as soon as possible.

On Thursday, he renewed that appeal. “This is to demonstrate the government’s strong will to stop [real estate] speculation,” Kang said.

As of Thursday, according to the Blue House, there were 12 senior secretaries and secretaries who owned more than one property in such areas.

Noh interviewed the 12 and strongly advised them to sell their second homes before the end of this month.

Noh himself owns two apartments: one in southern Seoul’s Banpo-dong, Seocho District, and another in Cheongju, North Chungcheong. He said he will sell the one in Cheongju. While Banpo is an overheated zone, Cheongju is not, and the Blue House has insisted until recently that Noh is an exception to his own order.

According to a March report by the official gazette, Noh’s apartment in Banpo was worth 590 million won ($492,000) and his Cheongju property 156 million won.

Earlier Thursday morning, it was announced that Moon’s approval rating fell below the 50 percent level for the first time in four months. The ruling Democratic Party (DP)’s approval rating also plummeted to 38.1 percent.

Realmeter analyzed that Moon and the DP are losing support because of the repeated failures of their real estate policy and a recent controversy over the fairness of Incheon International Airport Corporation’s plan to hire subcontracted security guards as full-time employees.