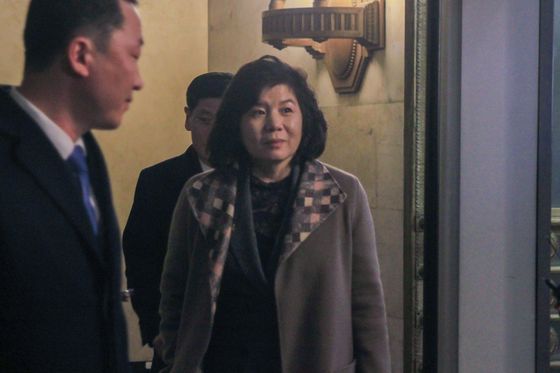 
Dismissing the prospect of another summit with Washington ahead of the U.S. presidential election in November, one of North Korea’s top diplomats on Saturday proclaimed that the regime felt no need to be used as a “political tool” by Washington.

“We do not feel any need to sit face-to-face with the U.S.,” Choe Son-hui, the North’s first vice foreign minister, said in an English-language statement released by the state-run Korean Central News Agency (KCNA).

Accusing the United States of considering “dialogue as nothing more than a tool for grappling with its political crisis,” Choe said the regime would never adjust or change policy that is “conditional on external parameters like the internal political schedule of someone” – an apparent reference to U.S. President Donald Trump and rumors that his administration may attempt another summit with Pyongyang.

“We can not but be shocked at the story about the summit indifferent to the present situation of the DPRK-U.S. relations,” Choe said, using the acronym for the country’s formal name, the Democratic People’s Republic of Korea.

“The U.S. is mistaken if it thinks things like negotiations would still work on us.”

The rumors, which Pyongyang apparently felt had enough credibility to warrant a response, concern speculations in Seoul and Washington that the White House is pursuing another summit before November to shore up the administration’s diplomatic credentials ahead of Trump’s reelection race in November.

Strangely, it was North Korea-hardliner and former White House National Security Adviser John Bolton who first floated the possibility of an “October surprise” from Trump while talking to reporters in New York on Thursday.

South Korean President Moon Jae-in also touched upon in a conference call with the European Union last Tuesday his hope to mediate another round of dialogue between North Korea and the United States before the election.

Local media in Seoul quoted a diplomatic source in Washington who said U.S. Deputy Secretary of State Stephen Biegun could carry a “highly positive message” to Seoul in his scheduled visit to South Korea this week, hinting that Trump may be willing to consider a sanctions relief deal that North Korea may find acceptable as a tradeoff for some of its nuclear capacity.

The buzz sustained hopes for more positive news in Seoul, which last month endured a series of escalated hostile actions by Pyongyang that included the demolition of the inter-Korean liaison office in Kaesong.

Denuclearization negotiations between North Korea and the United States have been in limbo since the second summit between Trump and North Korean leader Kim Jong-un fell apart February last year in Hanoi, Vietnam.

The two leaders met a third time in the Korean demilitarized zone in June 2019 and agreed to resume talks, but working level discussions failed to make headway and collapsed in October.

Evoking the regime’s distrust for Washington following the series of abortive talks, Choe said that, even without a meeting, the North anticipated a “shallow trick” from the United States that would show the Trump administration was unwilling to truly offer meaningful concessions.

“Is it possible to hold dialogue or have any dealings with the U.S. while hostile policy toward the DPRK disregarding the agreements already made at the past summit persist?,” she added.

Pyongyang has “already worked out a detailed strategic timetable for controlling the long-term threat from the U.S.,” Choe said, possibly in reference to the regime’s efforts to build its arsenal of missiles and new weaponry, which may include what experts say is a submarine capable of launching a nuclear warhead.

Experts in Seoul were divided about whether Choe’s statement reflected a true reluctance from the North to resume talks with the United States, or if it was Pyongyang’s attempt to test American intentions.

"By saying it has a plan to threaten the United States in the long term and hinting at military action, the regime is attempting to shore up its negotiating position,” said Yang Moo-jin, a professor at the University of North Korean Studies in Seoul.

“If Special Representative Biegun fails to present a significant proposal pre-coordinated with South Korea [during his visit to Seoul], Pyongyang will not easily return to dialogue.”