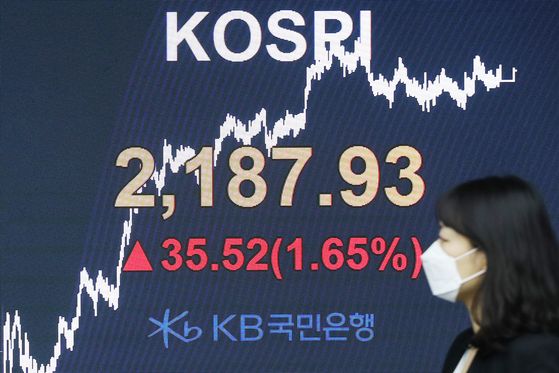 The final Kospi figure is displayed on a screen in a dealing room of KB Kookmin bank, located in the financial district of Yeouido, western Seoul, Monday. [YONHAP]


Stocks rallied Monday on hopes of economic recovery led by the government's extra budget and possible robust earnings from tech companies. The won rose against the dollar.

The Kospi's rally was largely attributed to rising optimism for a quick economic recovery.

The National Assembly passed a 35.1 trillion-won extra budget Friday, while the number of new Covid-19 infections showed a slight decrease.

Korea added 48 new coronavirus infections Monday, down from 61 reported Sunday and 63 on both Friday and Saturday.

"It's time that the stocks show different price changes according to their earnings report," IBK Securities analyst Kim Ye-eun said.

The local currency closed at 1.195.80 won against the dollar, up 2.80 won from the previous session's close.

The yield on three-year bonds added 1.4 basis points to 0.853 percent, while there is no data for the return on the benchmark 10-year government bonds as the U.S. market was closed for the Independence Day holiday.