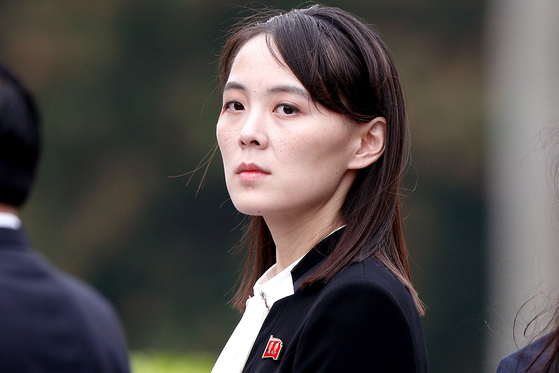 
North Korean leader Kim Jong-un’s younger sister on Friday ruled out a summit with the United States this year, saying such a meeting would be “unprofitable” for Pyongyang.

“Serious contradictions and unsolvable discord exist between the DPRK and the United States” Kim Yo-jong said in an English-language statement carried by state media, referring to North Korea by an acronym for its official name, the Democratic People’s Republic of Korea.

“Under such circumstances, I am of the view that the DPRK-U.S. summit talks is not needed this year and beyond, and for our part, it is not beneficial to us unless the United States shows decisive change in its stand.”

The younger Kim provided a detailed justification of why the regime no longer has an appetite to engage with the Trump administration.

With Washington unprepared to draw up new terms satisfactory to the North, further talks would only waste time and “entail a risk of impairing the special relations” between Kim Jong-un and Trump, Kim Yo-jong said.

The idea of an “October surprise” — that is, a surprise summit ahead of Trump’s reelection bid in November — was also unacceptable because it was “foretold by Bolton who is a human scum,” Kim said, referring to comments made by Trump’s former National Security Adviser John Bolton that the U.S. president may attempt another summit with Pyongyang to shore up his diplomatic credentials ahead of the election.

Much more revealing of the North’s rationale, however, were Kim’s comments about the future of the Trump administration as a whole, which betrayed a waning confidence in the likelihood of Trump’s reelection in November.

“The personal feelings of Comrade Chairman towards President Trump is undoubtedly good and solid, but our government should not adjust its tactics on the U.S. and our nuclear program depending upon the relations with the U.S. President,” Kim Yo-jong said.

“We have to deal with President Trump and the succeeding U.S. administration, and the U.S. at large.”

Pyongyang’s ability to achieve two high profile summits, as well as a third impromptu meeting, with Washington was largely due to the impulses of Trump, who, despite exchanging fierce barbs with Kim Jong-un in 2017, enthusiastically agreed to meet the dictator without any preconditions in Singapore in 2018.

But beleaguered by the coronavirus pandemic and racial tensions, Trump’s chances of reelection have diminished, leaving Pyongyang wondering whether an America under Democrat Joe Biden will be willing to continue dialogue with the regime, or rather, revert to the “strategic patience” policy of isolation toward the North.

This anxiety about the future could be gleaned in the notably softer tone of Kim Yo-jong’s latest statement in comparison to her diatribe against Seoul weeks earlier.

“We do not have the slightest intention to pose a threat to the U.S., and Comrade Chairman has already made it clear to President Trump,” she said. “Everything will go smoothly if they leave us alone and make no provocation on us.”

Kim went so far as to assert that North Korea’s denuclearization was still viable, just “not possible at this point in time.” Only when there are major changes made by the U.S. — “i.e. the irreversible simultaneous major steps to be taken in parallel with our actions” — can Pyongyang be impelled to reciprocate.

Such major changes expected by North Korea “does not mean the lifting of sanctions,” Kim Yo-jong added, though without further details.

Pyongyang must return to talks