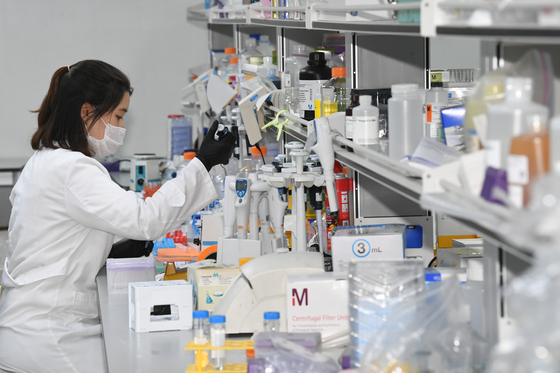 
With more than 300 recovered Covid-19 patients volunteering to donate their blood, GC Pharma will begin producing the first batch of its coronavirus plasma treatment this week.

The first batch will be used for Phase 2 clinical trials scheduled to start this month.

Plasma treatments are made from immune proteins extracted from the blood plasma of recovered patients, which contain various antibodies. The concept is different from plasma therapy, which is a method of therapy to transfuse the plasma of a recovered patient directly to another patient.

Although the treatment can be made quickly and easily with the blood of a completely recovered patient, it is difficult to mass-produce, as production is limited by the number of donors.

GC Pharma is the government’s sole partner in developing plasma treatment to combat the pandemic. On Monday, the company shares surged 15.68 percent from Friday to close at 195,500 won ($163).

Just a month ago the company and local authorities were struggling to find donors after GC Pharma first announced it was developing a plasma treatment for Covid-19, properly named GC5131A, in April. As of June 4, there were only 18 Covid-19 survivors that were willing to make donations and just five had actually donated.

Donations surged over the past month. According to the Korea Centers for Disease Control and Prevention (KCDC), 375 recovered Covid-19 patients have come forward to donate their blood plasma as of July 11. Among them, local authorities have already collected plasma from 171 people. Researchers needed 150 samples to get started.

“It was already agreed to exempt Phase 1 trials, and we’ve secured more than 300 donations of blood plasma, which is enough to start the next clinical trial,” Lim In-taek, an official at the Ministry of Health and Welfare that oversees welfare policies, told local reporters on Friday. “Our support is focused on developing a treatment by the year’s end.”

According to GC Pharma, Phase 1 clinical trials for GC5131A were cleared because the action mechanism and production technology is identical to other plasma treatments commercialized in the past for other diseases like hepatitis B. In other words, the technology is considered safe.

Five hundred members of the controversial Shincheonji Church of Jesus sect also volunteered to donate blood plasma, although this won’t be used for the upcoming clinical trial but for actual production after the tests are over.

Three buses equipped with blood collection equipment were sent to the Daegu and North Gyeongsang area on Monday, the epicenter of the religious group’s outbreak.

The government also announced Friday that 111.5 billion won would be allocated to the task of developing Covid-19 treatments and vaccines, from a 35-trillion-won extra budget passed by the National Assembly earlier this month. A total of 94 billion won will be dedicated to supporting clinical trials of candidate drugs, among which 45 billion won is reserved for treatment and 49 billion won for vaccines.

The only Covid-19 treatment actually available to patients in Korea at the moment is Foster City, California-based Gilead Sciences' remdesivir. Originally developed as an Ebola treatment, remedesivir saw global demand rapidly rise after it was found to shorten the recovery period and reduce the fatality rate in a clinical test conducted by the U.S. National Institute of Health in late April.

After the drug became available for local hospitals this month, 42 domestic patients had been treated with remdesivir as of July 12. Among 27 that were assessed to check their level of recovery, 15 showed no signs of improvement and three actually showed their state worsen.

Nine patients saw improvements, but Kwon Jun-wook, deputy director of the KCDC, said it was “unsure whether it was the drug or the patient’s immune system” that did the job.