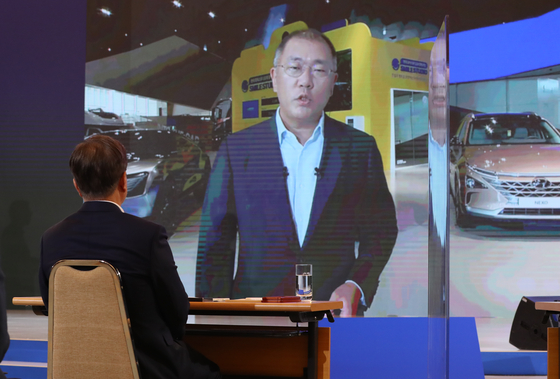 
Hyundai Motor Group plans to increase its global market share for electric vehicles to 10 percent by 2025, the group's head said as he publicly briefed President Moon Jae-in on how the automaker will align its business strategy with the government’s “New Deal” program on Tuesday.

During the same event, the CEO of internet giant Naver also envisioned a future driven by intelligent data centers.

In a teleconference with Moon and other high-level government officials, Hyundai Motor Group Executive Vice Chairman Euisun Chung vowed to grow sales of electric vehicles (EVs) to 1 million and worldwide market share to more than 10 percent by 2025.

In the course of expanding its market share, 2021 will be of particular importance for the automaker.

“Next year will be an important milestone because [Hyundai Motor] will roll out EV models running on an EV-exclusive platform,” he said.

He presented the plan standing in front of Hyundai's eco-friendly vehicles, including the upcoming EV models Genesis Essentia and Prophecy and already-unveiled Nexo and Xcient Fuel Cell, the world’s first mass-produced heavy-duty trucks powered by hydrogen.

Chung went on to note the company’s focus on hydrogen-powered vehicles that could go hand in hand with the Moon administration’s efforts to curb carbon emissions, as shown in the "Green New Deal" initiative.

“We joined hands with 140 partnered units [to develop fuel cells] over the past 20 years,” Chung said. “We will keep up the effort to double [fuel cells'] lifespans in three to four years while halving the price by developing a next-generation system.”

The carmaker introduced the concept at the 2020 CES earlier this year, putting forward its S-A1 that comes with a 492-foot wingspan and weighs 3,125 kilograms (6,889 pounds). 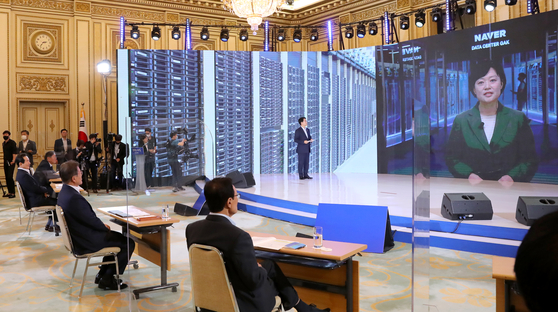 
Han Seong-sook, CEO of Naver, outlined the company’s vision to the president from a data center named Gak in Chuncheon, Gangwon.

Han presented the idea of a future data center that not only manages a large amount of data but processes automated analytics of the information.

“The future data center will be smarter to a degree where it can be called a ‘brain center,'” she said.

“The value of data can be elevated when [a data center] is capable of deploying data, a step forward from simply storing it,” Han said.