Ju-ne and Jay of boy band iKON suffered minor injuries on Monday after the car they were traveling in crashed into a wall. The driver of the car was said to be drunk.

The band's agency YG Entertainment said Tuesday that it will carry out an internal investigation.

According to Namhae Police Station, the car that Ju-ne and Jay — whose real names are Koo Jun-hoe and Kim Jin-hwan — ran into a concrete wall after skidding on wet roads on a highway in Namhae, South Gyeongsang, at around 3:48 a.m. Monday.

Ju-ne and Jay, as well as the driver — a man in his 20s — were transported to a nearby hospital. All three sustained minor injuries.

The driver was booked by police after his blood alcohol level was found to exceed the legal limit. 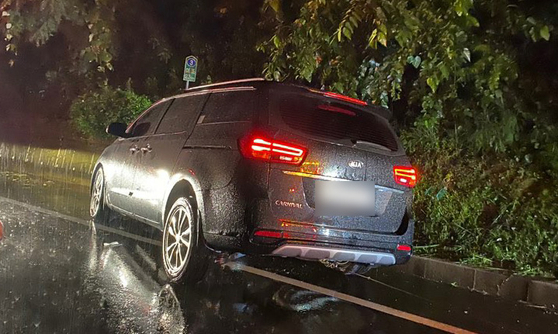 The car where Ju-ne, Jay and a man in his 20s were in, drove into a concrete retaining wall in South Gyeongsang, Monday. [YONHAP]


According to the police, the driver stated that the two members of iKON did not drink any alcohol, but the police will look into whether they had knowingly abetted drunk driving, which could lead to criminal charges.

"We feel a deep sense of responsibility that this accident has happened, despite the strict drunk-driving rules we have within our company," YG Entertainment said.

"We will thoroughly look into the details of the case and come up with necessary measures that correspond with the gravity of the situation. The driver will sincerely cooperate with the police investigation."

Boy band iKON already suffered a blow earlier this year when its member B.I quit the band after he was indicted on charges related to illegal drug use in 2016.