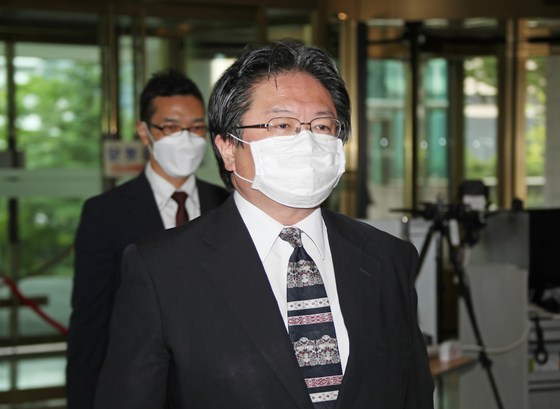 Hirohisa Soma, a senior official from the Japanese Embassy in Korea, arrives at the Korean Foreign Ministry in central Seoul Tuesday morning after the ministry summoned him to protest Tokyo's claims over the Dokdo Islets in a defense white paper. [YONHAP]

The white paper, released by the Japanese Defense Ministry on Tuesday, argued that territorial claims over Dokdo, which it calls Takeshima, and four of the Kuril Islands under Russian control remain “still unresolved.” This is the 16th year in a row that the annual white paper has asserted a territorial claim to Dokdo, which Korea has controlled since its independence from Japan in 1945.

In a statement released by its spokesman, the Korean Foreign Ministry said it “strongly protests the Japanese government’s decision to renew unjust territorial claims” over Dokdo, which it said was clearly Korean territory on the basis of history, geography and international law.

“The Japanese government should understand that repeating unjust and baseless claims over Dokdo do not in the least help Korea-Japan relations,” the spokesman said, adding Seoul “will respond sternly to any provocations” over the islets.

Kim Jung-han, the Foreign Ministry's director-general for Asia and Pacific affairs, summoned Hirohisa Soma, a senior official from the Japanese Embassy in Korea, to the ministry in central Seoul Tuesday morning to protest the white paper's language and urge Tokyo to retract the recent assertions.

Japan has asserted claims over Dokdo, also known as the Liancourt Rocks, since 2005. In May, Tokyo issued its 2020 Diplomatic Bluebook at a cabinet meeting which again referred to Dokdo as its “inherent territory” and called Korea’s “occupation” of the islets illegal.

Maps showing the locations of major military bases on the Japanese archipelago contained in the white paper also included Dokdo as Japan’s territory, listed in every case as Takeshima.

The paper further referred to a July 2019 incident in which a Russian A-50 airborne early warning and control aircraft invaded Dokdo’s airspace. Korea responded by scrambling its military jets and firing warning signals.

Separate from the long-standing dispute over Dokdo, relations between the two neighboring countries remain cold after last year's heightened tensions over trade controls and compensation for wartime labor victims.

Korea eventually announced plans to terminate their bilateral military intelligence-sharing pact, the General Security of Military Information Agreement, or Gsomia, but it later suspended the decision.

The Japanese white paper on Tuesday listed additional disputes the country had with Korea’s defense authorities, which included Gsomia, a military faceoff between the two countries over a South Korean warship’s radar lock-on on a Japanese patrol aircraft in December 2018 and Seoul’s refusal to allow a Japanese warship to hoist Tokyo’s controversial rising sun flag during an international ceremony in Jeju in October 2018.

Korea's ranking on the white paper’s list of important partner countries with which to cooperate on security matters also dropped to No. 4, highlighting the growing distrust between the neighbors, which in earlier times regarded each other as closer security partners.