Basic income, in which everyone receives a monthly stipend, has become a major topic of debate.

On Tuesday, the idea was discussed at Sogang University in western Seoul. At the forum, many professors and experts argued that adopting a basic income policy would worsen the country’s unemployment and poverty rates.

In the midst of the coronavirus crisis, United Future Party leader Kim Chong-in remarked that a basic income would give people the “economic freedom to buy a loaf of bread.”

“According to data from the Organization for Economic Cooperation and Development (OECD), higher-income households in about half of the OECD countries including Greece and Italy have been receiving more benefits from the government than have lower-income households,” said Ok Dong-sock, professor of economic policy at Incheon National University during the debate.

Ok added that adopting the basic income system might increase the unemployment rate and the poverty, as people might be incentivized to remain unemployed.

“Countries such as Germany and Sweden, which provide more welfare than just cash handouts, have done well in terms of wealth redistribution," Ahn said. “Basic income is gaining public support since the government started distributing emergency relief grants. However, who and how people will pay is a different story." 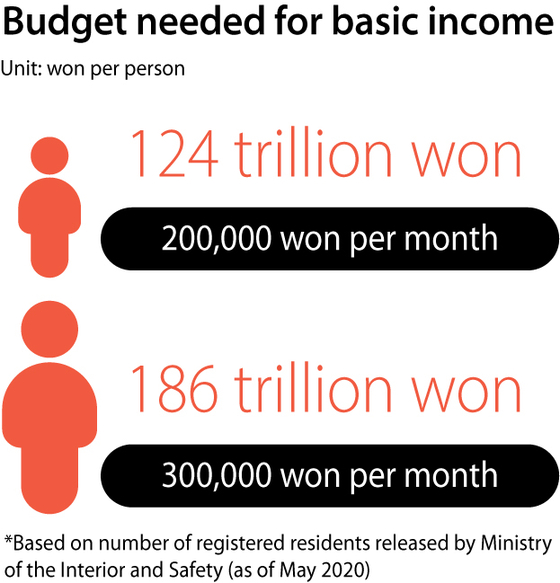 The major issue at the debate was regarding the government's ability to secure the necessary funding, as it would cost 180 trillion won ($150 billion) a year assuming each person will receive 300,000 won a month.

According to research conducted by Kang Nam-hoon, an economics professor at Hanshin University, about 10 trillion won of the 180 trillion won can be secured by halting existing social welfare programs. Raising taxes will be inevitable to secure the remaining 170 trillion won.

“All citizens must be aware that they have to pay additional taxes,” said Kim Yong-ha, a professor of IT-Finance Management at Soonchunhyang University.

LAB2050 CEO Lee Won-jae supports the adoption of a basic income, saying that it is possible without raising taxes.

"Korea has been suffering job losses due to improvement in productivity as a result of technological development," Lee said during the debate. “[It is time for us] to consider adopting the basic income system.”