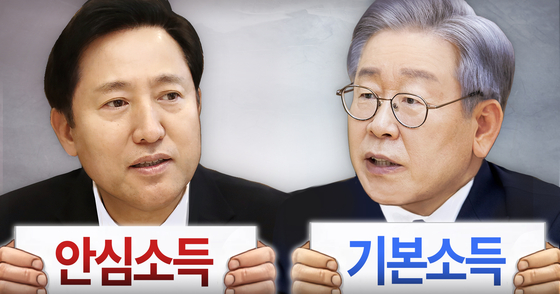 
Universal basic income has emerged as a major issue ahead of the presidential election, which is now just nine months away.

Other DP presidential candidates are against the idea. Lee Nak-yon and Chung Sye-kyun, who both served as prime minister under the current administration, oppose a universal income.

People Power Party's Yoo Seong-min, also running for president, rails against Governor Lee's idea, saying basic income is populist, but has proposed his own welfare program, "fair income," that would help lower-income families through taxes collected from the wealthy.

Yoo argues that the program would help close the income gap.

While not running for president, Seoul mayor Oh Se-hoon has pitched the ansin income program, in which people below a certain income level will receive support.
"The discussion on basic income in the political community shouldn't be just about income but expand into overall welfare including the changing economic structure, growth and labor reform," said Ahn Sang-hoon, a Seoul National University social welfare professor.

The issue could inspire a national debate, much like the back-and-forth on the universal free lunch for students that was raised by then Seoul mayor Oh more than a decade ago and led to his resignation from office.

On June 9, Gyeonggi Mayor Lee partially acknowledged the value of the proposal by Seoul Mayor Oh, in which different income groups receive different cash welfare accordingly to their current income status, but he argued that universal basic income is not just a welfare policy and is more of an economic policy.

He stressed that his basic income will allow families to spend, contributing to the continuing growth of the domestic economy, especially at a time of recovery and as new jobs are scarce and more companies adapt to fourth industrial revolution technologies.

The political leaders of the opposing party argue that universal basic income is a concept that is unfair and unjust.

"It is a policy that can only be thought of in a time when all 50 million people in the country are poor," said PPP's presidential hopeful Yoo. "Governor Lee's basic income is rather unfair and discriminatory."

People Party's leader Ahn Cheol-soo, another presidential candidate, argued that unilaterally distributing income isn't an idea that is fair, while championing the idea of cash welfare only provided to a certain income group and in different amounts.

While the debate between Governor Lee and the opposition parties has been focused on whether the basic income should be universal or selective, the argument within Lee's DP has been whether giving out cash is the best welfare solution.

Lee Nak-yon, the former Prime Minister and former DP leader, said not only is Governor Lee's universal basic income costly, it provides less support than the actual help that the less fortunate need.

"There are ways to achieve more than the basic income by working more strongly on the social welfare system," former prime minister Lee said.

Park Yong-jin, DP lawmaker, who recently announced his presidential candidacy and is the youngest candidate within the ruling party, said we should now move beyond welfare programs that hand out cash collected through taxes.

He proposed a state fund where the investment profits are shared among the people.


Some of the public figures who are considered as possible candidates, including former Finance Minister Kim Dong-yeon and Won Hee-ryong, argue that the focuses should be more on increasing opportunities rather than simple welfare to allow people in difficult situations, including low-income households, to be self-sufficient. This includes financing education and vocational training.

Lee Kwang-jae, a DP member who recently announced his candidacy, said a universal basic income will end as a trial unless a welfare overhaul increasing real household income through jobs is achieved.

While raising questions on funding, none of the candidates have yet offered a clear means of financing.

The Gyeonggi governor has raised the possibility of funding the basic income through carbon taxes or data taxes, but these are still general plans without specific details.

"Unless there are cuts to existing welfare spending, in order to adopt basic income, raising taxes will be inevitable," said Sung Tae-yoon, a Yonsei University economics professor.

"As Governor Lee is leading in the polls [among DP candidates], the other candidates will likely increase their attack on the weakness of Lee's basic income," Yoon said.