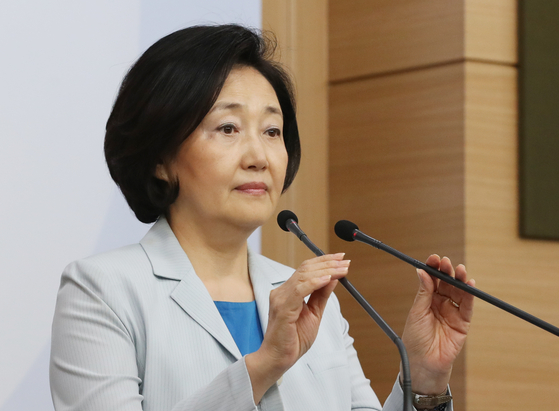 SMEs and Startups Minister Park Young-sun speaks at a briefing in central Seoul on Wednesday about the result of a national sales promotion held over the past two weeks from June 26 through July 12. [NEWS1]


Sales tied to a government-led promotion over the two weeks have been large, announced the Ministry of SMEs and Startups on Wednesday.


The promotion was a government-led effort focusing on economic activity to help vendors negatively affected by the Covid-19 outbreak.


Offline, traditional markets saw average boosts in daily sales of 10.7 percent compared to the previous week from June 19 through June 25. The data showed the number of visitors rose 12.1 percent, despite earlier concerns that senior citizens — primary customers at traditional markets — were not aware of the promotion.

Discount chains like Emart, Lotte Mart and Homeplus continued to see their sales decline, but the rate slowed to 1.4 percent compared to the same period last year. The regulation that forces large discount stores to close on some Sundays was believed to have limited sales.

The national promotion was held to help small vendors demonstrate their products and get acquainted with digital sales channels, according to the ministry.

The total amount approved by credit and debit cards during the period totaled 38.25 trillion won, up 4.56 percent compared to the same period last year.

“Based on the experience and lessons learned from the latest sales promotion, transformation to the digital economy for small vendors will be accelerated,” said SMEs and Startups Minister Park Young-sun in a statement.

Meet a picker who really does pick the pickled peppers