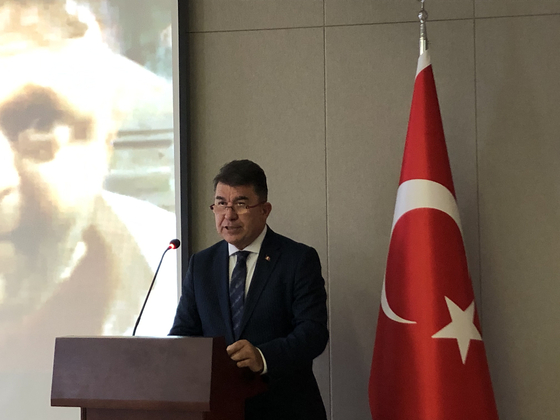 Ersin Ercin, ambassador of Turkey to Korea, speaks during an event at the embassy in central Seoul on Wednesday to commemorate the fourth anniversary of an attempted coup in Turkey. [ESTHER CHUNG]


The Turkish Embassy in Korea commemorated Wednesday the fourth anniversary of the attempted coup against Turkish President Recep Tayyip Erdogan.

“We are gathered here today to remember the dangerous coup d’état attempt of July 15, 2016,” said Ersin Ercin, ambassador of Turkey to Korea. “The Fethullah Gulen Terrorist Organization (FETO) gradually infiltrated into various Turkish institutions including the army, de facto demobilizing it. The coup resulted in over 250 people killed and 2,000 more injured.”

The FETO is blamed by the Turkish government as the force behind the unsuccessful effort to overthrow Erdogan.

The main purpose of the event, the embassy said, is not only to remember the coup, but to also warn other countries about FETO. Ercin alleged that the organization had at least one active member residing in Korea, whom he accused of networking with local businesses and governments while funding the group.

“That’s exactly how they had established themselves in Turkey,” he said. “Speaking from experience, I can confidently assert that, as they gain influence they demand a higher stake in the economic and political life of their host countries. And given their track record, it would be extremely naïve to assume that their end goal is for the good of the Korean society.”

The embassy said it had previously expressed similar concerns to the Korean Ministry of Foreign Affairs.

“We have submitted our report on the group’s activities in Korea to the ministry,” said Omer Orhun Celikkol, deputy chief of mission and counsellor at the embassy. “They have committed acts of illegality in Turkey and we are asking governments around the world to cooperate with us on this matter.”

The Turkish government since 2016 had repeatedly made extradition requests from the United States for Fethullah Gulen, whom it describes as the leader behind the coup movement. Gulen had been living in exile in Pennsylvania since 1999, according to an op-ed he wrote for the New York Times in July 2016.

“My philosophy — inclusive and pluralist Islam, dedicated to service to human beings from every faith — is antithetical to armed rebellion,” Gulen said in the op-ed, denying his involvement in the coup.

‘Summer of joy and freedom’