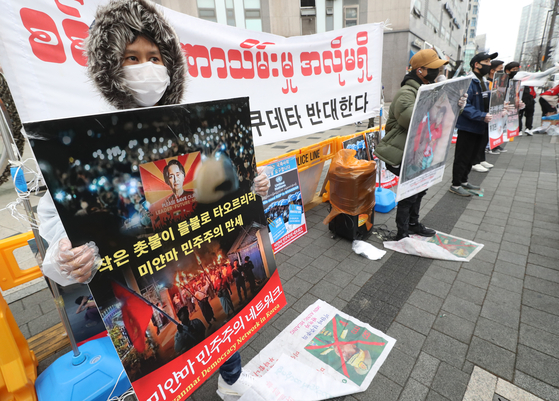 A group of protestors hold a rally against the military coup in Myanmar on Sunday in Seoul. [YONHAP]

A Shinhan Bank employee was shot on her way home from work at a branch in Yangon, Myanmar, the bank said Thursday.

The Burmese employee was shot at around 5 p.m. on Wednesday while traveling home from work using a corporate car, according to the bank. The employee is being treated at a hospital.

The bank said the Myanmar branch had already minimized operations after a recent coup, cutting operating hours and asking some employees to work from home.

The coup in Myanmar has sparked protests, some of which have turned deadly.

Shinhan Bank said it has declared a level three crisis management situation. Under level three, the branch will be temporarily closed and all employees will work at home. It is also reviewing bringing home Korean employees from Myanmar.