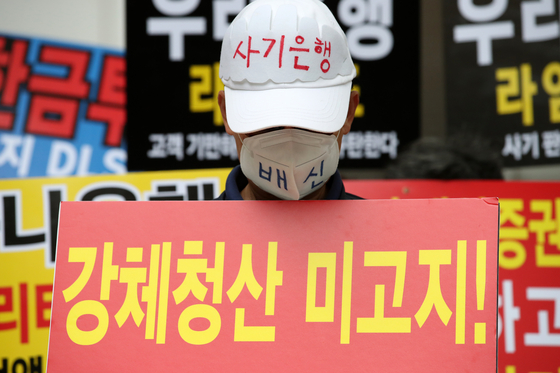 Investors that suffered losses from private equity funds stage a demonstration in front of the Financial Supervisory Service building in Yeouido, western Seoul on June 30. [NEWS1]

Kim Jeong-tae, a former official from Korea Exchange, will lead a team of 30 to look into some 10,000 private equity funds and 233 fund managers.

For funds that have red flags, the investigating team will actually visit the private equity fund managers.

The first targets will be five private fund managing firms identified by the FSS during its first audit from November 2019 through January, when it looked into some 52 fund managers and 1,786 funds after the Lime Asset Management scandal. One of them was Optimus Asset Management, which failed to repay some 900 billion won ($747 million) in investments and is currently under investigation for fraud.

The investigation is expected to continue until 2023, according to the FSS. For any problems detected, the FSS will report misconduct to the prosecution and make follow-up efforts to protect investors.

“It is meaningful that the FSS at least gave a message to those involved in the industry that it will strengthen surveillance," said Hwang Sei-woon, a research fellow at the Korea Capital Market Institute.

With a number of recent scandals in the private equity industry, some lawmakers are calling for stronger fines on shady operators.

Lawmaker Jeon Jae-su from the ruling Democratic Party (DP) proposed a revision to the financial consumer law that proposes a punitive compensation system. If his proposal passes, brokerages or sellers of investment products will be liable to pay triple the original investment if investors suffer losses because of unlawful actions.

Kim Han-jeong, another DP lawmaker, proposed a revision that puts stricter punishments on managers if their companies do not comply with their own internal risk management protocols.

“It is important to increase the entry barrier for private equity funds,” said Hwang.

"However, that alone is not enough and should be complemented with stronger punishments for losses that occurred after. There are people who are worried about a possible shrinking of the market, but it should be effective in preventing similar cases from happening again."

From last April through July 5, some 22 private equity funds have stopped customers from withdrawing their investments, amounting to 5.6 trillion won, according to the FSS. A total of 1,003 complaints were filed to the financial regulator recently, with the most against Lime Asset Management, with 672 or 67 percent.