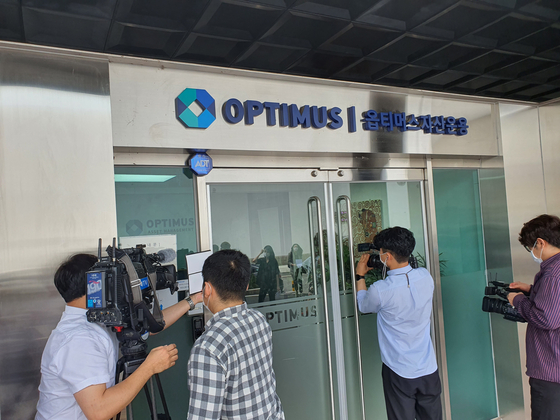 Reporters wait in front of the office of Optimus Asset Management in Gangnam District, southern Seoul, on July 15. [JEONG YONG-HWAN]

According to the regulator, none of the 515.1 billion won ($430 million) of funds under management by Optimus was actually invested in public institution accounts payables, which are government obligations likely to be paid. Instead, 98 percent of the money was funneled through private bonds into risky assets. Some investments could not even be found.

Along the way, Optimus audaciously fabricated documents and even hid its computers in an attempt to cover its tracks.

“We confirmed the company made illegal transactions by investing in assets that were not stated in the investment proposal, embezzled fund money and obstructed the prosecution from fulfilling its duties,” Kim Dong-hoe, the FSS deputy governor, said at a press briefing at the regulator’s headquarters in Yeouido, western Seoul.

“Our top priority is to protect investors. The FSS is currently working to preserve the funds as much as possible and identify assets. We’ve appointed a person within our organization to manage them and are planning to transfer the funds later. The FSS is also looking into legal consultations to resolve complaints from investors."

The FSS conducted an investigation into troubled Optimus from June 10 through July 19 after the firm froze around 24 funds with some 240 billion won of investment.

Despite it stating that 95 percent of assets will be invested in accounts payable to public institutions, customer funds were never utilized in this way.

“From our investigation, we found that the management company did not make any investments in public companies. They were only mentioned as an idea Optimus had when it was developing new products in 2017,” said the FSS.

Optimus gathered around 515.1-billion-won worth from some 1,200 individual and corporate investors and said it would be using the money to provide funding for companies working on government projects.

The return was set around 3 percent, slightly higher than bank savings rates. Almost half of the investors were older than 60, suggesting that retirement funds were at risk.

Out of the 511 billion, approximately 300 billion is estimated to have gone into more than four companies and used to invest in real estate and equities and used for money lending. The FSS could not locate the remaining 200 billion won.

“The amount could be exaggerated considering that most documents submitted by Optimus were fabricated. It was hard to identify the legal relationship with some assets, and they may be hard to recover,” Kim said.

Optimus CEO Kim Jae-hyun embezzled tens of billions of won of investor money, the FSS said. It found that some of the money ended up in Kim's bank accounts and was eventually used to purchase shares and futures options.

Kim has been arrested and is under investigation for fraud. 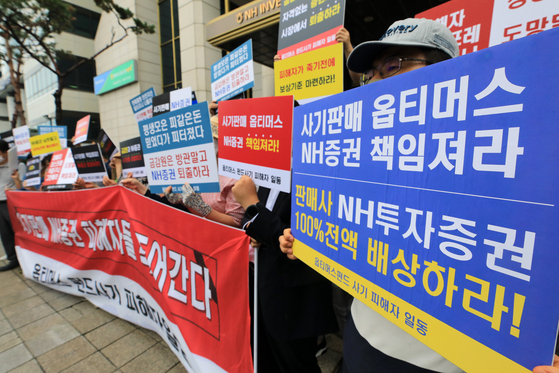 Investors stage a protest in front of the NH Investment & Securities building in the financial district of Yeouido, western Seoul, Thursday. [NEWS1]


The FSS mentioned it is currently investigating other entities — brokerages, trust banks and depositories — that worked with Optimus. A team of 20 accountants is currently reviewing the assets.

A probe into NH Investment & Securities, which sold around 88 percent of the Optimus funds, will continue until July 24. The brokerage is suspected of wrongly assessing the funds and misselling them as stable.

The FSS finished investigations on July 17 into the Hana Bank trust bank and the Korea Securities Depository. The depository is suspected of failing to cross-check Optimus assets with depository statements.

The FSS did not give a definite answer as to whether investors in Optimus would be fully compensated, as was done for some victims of Lime Asset Management.

NH Investment & Securities said it would decide on a compensation plan at a board meeting Thursday, but failed to make a decision. Investors staged a demonstration in front of the brokerage demanding NH pay back the full amount.

Korea Investment & Securities, the second-largest seller of Optimus funds, decided on July 3 to return 70 percent of the investment in Optimus Hermes 1, which was frozen on June 18.

When asked how it could miss such a dramatic fraud, the FSS said that it had looked into Optimus three times prior to the most recent investigation, though the scope and scale of the previous efforts were not made clear.