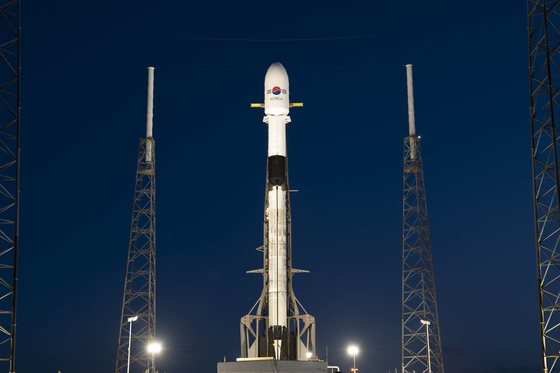 
Korea launched its first military satellite into space Tuesday morning aboard a U.S. rocket, heralding a new era for the country’s national security.

The dedicated military communications satellite Anasis-II was launched atop a Falcon-9 rocket built by the U.S. private aerospace manufacturer SpaceX on Monday at 5:30 p.m. EST from the Kennedy Space Center at Cape Canaveral, Florida, according to Korea’s Defense Acquisition Program Administration (DAPA).

The Anasis-II, which stands for Army/Navy/Air Force Satellite Information System 2, separated from the rocket at an altitude of around 630 kilometers (390 miles), and communications from the spacecraft were received at the Toulouse Space Operations Center in France at 7:19 p.m.

The successful launch made Korea the 10th country in the world to operate a satellite solely for military purposes.

Anasis-II replaces the Anasis-I — also known as the Mugunghwa-5 — the country’s first communications satellite, which was used for both civilian and military purposes from 2006.

The Anasis-I will no longer be used for military purposes, as it has been deemed obsolete and potentially vulnerable. In 2012 for example, the satellite was targeted by a North Korean jamming attempt, while a solar panel on the spacecraft was discovered to have broken down in 2014.

The Anasis-II can relay twice as much data and is immune to satellite jamming attacks by hostile forces, allowing the Korean military to maintain constant and stable communications, DAPA said in a press release.

Little more is known about the satellite other than it will “provide secured communications over wide coverage,” according to Airbus Defense and Space, its manufacturer.

After around two weeks of flight, the satellite is due to enter its regular orbit around the Earth at an altitude of about 36,000 kilometers.

The launch of the Anasis-II fulfills a long-standing objective of the Korean military to secure its communications network.

In 2014, when the Korean government signed a deal with U.S. arms maker Lockheed Martin for 40 F-35A fighter jets at a cost of 7.4 trillion won ($6.1 billion), it agreed to receive a communications satellite from the company as an offset deal.

Lockheed subcontracted European manufacturer Airbus in 2016 to build the satellite according to specifications laid down by Korea’s domestic arms manufacturer, the Agency for Defense Development.

Seoul’s military believes that with the Anasis-II in orbit, it has come one step closer to gaining certification for the transfer of wartime operation control (Opcon) of its forces from the United States, which it hopes to achieve by the end of President Moon Jae-in’s term in 2022.

Korea’s security planners also hope to launch a spy satellite into space, as part of a trillion-won project to enhance the country’s military reconnaissance capabilities.

Tuesday’s launch also broke another record for SpaceX, which achieved the quickest turnaround between flights reusing the same booster.
The first stage booster that was used to lift the Anasis-II from the Earth was the same used for the company’s first manned spaceflight mission 51 days ago, on May 30, when it launched two NASA astronauts to the International Space Station. SpaceX said it would recover the booster again to use for a subsequent launch.

The Anasis-II launch was originally planned to take place on July 14, but was delayed due to a problem with the Falcon 9’s second stage booster.