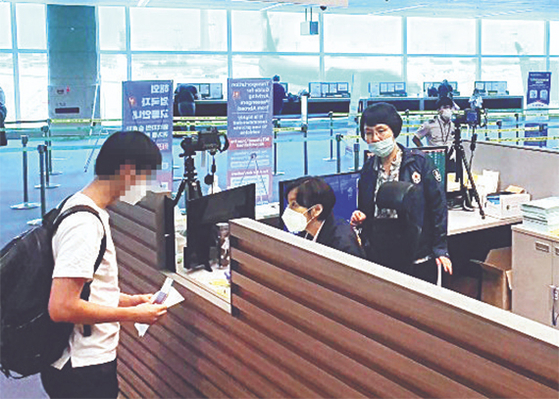 
Quarantine checkpoints at Incheon International Airport are the frontlines in Korea's war on the coronavirus, keeping overseas cases from becoming sources of local transmission.

The JoongAng Ilbo spoke with four sentinels on that front line, who have been manning this first line of defense for the past six months.

Kim Jin-sook, 54, a senior official at the Incheon Airport National Quarantine Station, was not even able to hold her 17-year-old daughter’s hand when she was hospitalized for cerebral meningitis in April. As a quarantine official, she didn’t want to take the risk of exacerbating her illness.

“My husband took care of our daughter instead,” she recalled. “I was not able to enter the hospital, and saw her face briefly outside. I am grateful that my daughter was not hurt and was understanding.” Her hospitalized daughter is the youngest of the couple's three children.

Kim was a pharmacy major at Seoul National University and joined the Ministry of Health and Welfare in 2006. She was assigned to Incheon International Airport in 2017 and currently oversees quarantine efforts at Terminal 2.

The first coronavirus case in Korea was confirmed on Jan. 20. Quarantine officials at Incheon International Airport were on guard since the first reports of a new coronavirus that came out of Wuhan in China’s Hubei Province in December, adopting a readiness posture 24 hours a day, seven days a week, while on the lookout for potential patients.

Korea has not imposed an entry ban on any places aside from Hubei Province. But quarantine measures have constantly evolved depending on the situation overseas.

New travel measures are usually implemented at midnight. “To ensure there would be no problems, there was no time to return home," Kim recalls. "At the peak, I couldn’t return home for 14 days and ate and slept at the airport.”

Another health official, Kim Han-suk, 47, specializes in internal medicine. She oversees quarantine measures at Incheon’s other terminal, Terminal 1. Kim has worked with the Health Ministry for over 10 years and was dispatched to the airport in August 2019.

“Covid-19 is completely rewriting the history of quarantine in airports,” Kim said.

Between Jan. 20 and July 18, 3.735 million passengers have entered Korea via Incheon International Airport.

There are a total of 111 quarantine officials at the airport, which equates to one official having covered some 30,000 passengers.

Kim said Incheon International Airport has tested 25,000 people and detected 700 Covid-19 patients. “The airport created an unprecedented system in which suspected cases were detected and only travelers with negative results were able to go out into the community," she said. "It can be compared to creating a small hospital.”

The so-called K-quarantine model has been noticed by countries overseas. Ambassadors from 25 countries including Colombia have made visits to the airport to learn the quarantine system.

Kim Han-suk was also responsible for detecting Korea’s Patient No. 1, a Chinese women in her 30s who entered Incheon on Jan. 19, and transporting her to the hospital immediately.

Kim downplayed her personal role, and said, “Quarantine is about team play.”

She added, “The first line of defense is checking for fevers, then checking for symptoms through a health questionnaire. If there are any symptoms, the second line is for epidemiological investigators to look more carefully into the case. If even one detail is missed, it can be difficult to identify a patient.”

Kim said, “Quarantine stations are not medical institutions, so we cannot provide medical treatment. Seriously ill patients had to be transported to hospitals and it was not always easy to obtain hospital beds.”

The youngest quarantine official at Terminal 2 is 24-year-old Choi Ji-hye. Choi, who has served as a public official for two years, has faced many trials along the way.

Local governments initially objected to accepting foreign patients, and Choi recalls, “Now that I think of it, I may have been able to push them harder to reconsider.”

Kim Han-suk said, “There is a need to review exactly what the scope of the airport quarantine station’s function is and to supplement it.”

Choi said that it takes around 30 minutes to an hour to inspect 100 to 150 passengers. When there were high numbers of passengers from the United States or Europe, it could take more than three hours to check them all because there were that many more suspected patients.

Choi recalled, “I would start work at 4 p.m. and work through the night for a 12-hour shift without even having time to go to the restroom.”

Kim Han-suk likewise said, “It is difficult to endure without a sense of duty. One person has to play the role of five.”

The airport’s quarantine strategy had to adjust. March and April saw a high number of passengers from Europe and the United States, where there were many cases, so measures focused on symptomatic patients. But after May, epidemiological tracing became important because of an increase in asymptomatic patients, Kim said.

One army doctor, Lt. Col. Kim Jeong-gil, 39, a rehabilitation specialist at the Armed Forces Yangju Hospital, was dispatched to Incheon airport from late February to early June and has overseen epidemiological surveys and specimen extractions.

Kim said he has lent his own nose dozens of times to train military doctors on how to collect specimens.

They constantly worried about getting infected. Lt. Col. Kim said that he once came into close contact with a Covid-19 patient and had to be quarantined at the airport.

But rather than worrying about himself, he was more concerned about letting his team down at the airport.

“We were in a situation where every person was vital, so my heart wasn’t at ease,” he said. Kim said he met his family just once during six months. "I didn't want to take the chance of being criticized as that quarantine official who went around without knowing that he had Covid-19."

In March, on his daughter’s eighth birthday, he left a gift on their front door without seeing her. In a text message to his wife, he asked her to wipe down the wrapped box — just in case.

Kim lodged near the airport for over 100 days without going home. He said, “My body was tired, but my heart was warmed at the thought that I was protecting my country.”

[WORD_ON_THE_WEB] 'Covid-19 is part of our everyday lives now'