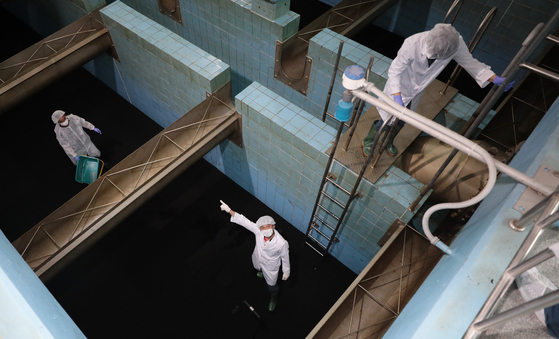 
Larva-like organisms have been found at seven water treatment plants nationwide, the Ministry of Environment announced Tuesday, but said that the bugs only made it into the tap water of two facilities that serve Incheon.


The ministry said it inspected 49 water treatment plants with activated carbon filters last week between July 15 and 17. In addition to plants in Incheon’s Gongchon and Bupyeong — already found to have midge larvae — bugs were also found in purification facilities located in Gyeonggi’s Hwaseong, South Gyeongang’s Gimhae and Yangsan, Ulsan and Uiryeong in South Gyeongsang.

No organisms were found to have entered the tap water in the five other plants, according to officials.

Incheon residents since July 9 have complained of worm-like creatures in their tap water, prompting the city government to investigate.

Authorities last week discovered that midges, or Cricotopus sylvestris, at Gongchon Water Purification Plant and Bupyeong Water Treatment Plant, had gathered in their filter beds. These plants distribute water to parts of Incheon that have found larvae in their tap water, such as Seo District, Ganghwa county and Yeongjong Island. Midge larvae are suspected to have hatched on the activated carbon filters and later traveled through water reservoirs, eventually ending up in tap water distributed to Incheon residents.

Activated carbon filters are used to remove odors and tastes from the water, but because of their open structure they can become a breeding ground for bugs to hatch eggs.

The Environment Ministry said that aside from the Gongchon and Bupyeong plants, there were no signs of larvae entering the water reservoir or supply centers in the water distribution process in other locations.

The ministry said it will replace the filters and clean out the contaminated water treatment plants by Thursday.

Activated carbon filters are used in all six water purification plants that distribute water to Seoul.

The ministry says it will conclude inspections of the 435 other water treatment plants nationwide later this week. The facilities do not use activated carbon filters, and the ministry believes there is a lower likelihood of finding larvae there.

There have been over 740 complaints related to bugs in the tap water as of Tuesday morning nationwide in cities including Seoul, Busan, Ulsan, Daejeon, Cheongju in North Chungcheong and different parts of Gyeonggi.

Officials have said that many of the additional cases including in Seoul and Busan were due to external factors, such as larvae hatching in water pipes, drains and water tanks, rather than contamination originating at the water treatment plants.

Residents' worries over whether they can trust the tap water has led to a spike in purchases of bottled water and shower filters.

Experts say that consuming or having contact with small amounts of midge larvae is generally not harmful to the body. However, some studies indicate that large quantities of ingestion or contact with larvae can lead to allergic reactions for some people.