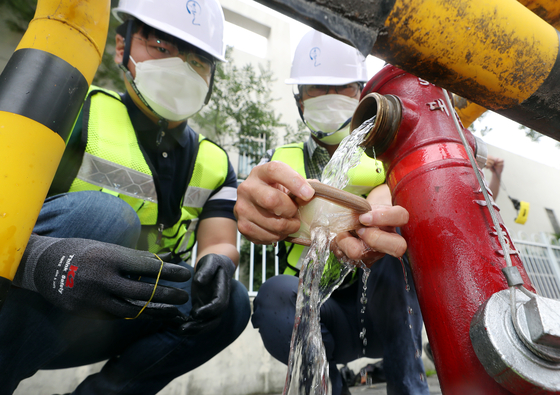 Officials inspect the water pipes and fire hydrant in Gyeyang District in Incheon Monday after larvae-like organisms were found in the city’s tap water. [YONHAP]

After larva-like organisms were spotted in tap water in Incheon earlier this month, similar discoveries were reported in Seoul, Gyeonggi and Busan, raising nationwide alarm over water safety.

The Seoul Waterworks Authority said Monday it received a complaint from a resident of Jung District, central Seoul, who discovered a one-centimeter (0.39 inches) larva-like organism in an apartment bathtub after taking a shower around 11 p.m. Sunday.

Waterworks officials collected the specimen and are trying to figure out how the organism got in the water system. Officials found no other organisms in the faucet or the bathroom. There was no issue with the building’s water tank, according to an initial probe, but many fruit flies were found outside the water tank.

Larvae were also reportedly found in tap water in Seoul’s Yeongdeungpo District, Gwangjin District and Jungnang District. Similar reports have been made in Paju, Hwaseong and Siheung in Gyeonggi in the past several days.

An initial complaint on July 9 of a worm-like creature found in the tap water in Seo District, Incheon, led to over 500 similar reports in the city over the past two weeks. Incheon residents shared photos and videos of larva-like critters emerging from tap water and shower filters via online forums.

The Incheon Metropolitan City finally addressed the issue on July 14 and launched an investigation into the city's water distribution system.

By July 15, areas impacted by the larvae extended beyond Seo District to other parts of Incheon including Ganghwa County, Gyeyang District and Bupyeong District. By Thursday, nine out of 10 Incheon districts and counties had reported discovery of bugs in their tap water. Authorities conducted an on-site inspection of the Gongchon Water Purification Plant on Friday, which distributes water to many of the affected areas, where organisms suspected to be cricotopus sylvestris, or midges, were discovered.

On Sunday, midges were found in the filter bed at the Bupyeong Water Treatment Plant which distributes water to Bupyeong and Gyeyang.

Between July 9 and 18, Incheon received some 590 complaints of bugs in the tap water, of which 149 proved to be suspected larvae after on-site inspections. More complaints have been coming in.

As of Sunday, there were 166 confirmed cases of bug discoveries in tap water, according to the Incheon Metropolitan City, of which 160 were from Seo District, Ganghwa County and Yeongjong Island, areas that received water from the Gongchon water plant. The remaining six cases were in Bupyeong and Gyeyang.

The Incheon city government is in the process of cleaning the water treatment plants and removing foreign substances from the pipes to stabilize the water quality.

“All the water at the Gongchon Water Purification Plant has been drained and cleaning has been completed, but water pipes connecting to the households may still have traces of the larvae,” an Incheon city government official said Monday. The official said authorities are still inspecting the Bupyeong Water Treatment Plant where dead midges, pupa and moth eggs were detected.

Over the weekend a resident of Busan’s Dong District reported a sighting of larva-like creatures in the tap water, and there have been similar reports in Cheongju in North Chungcheong.

Busan city government on Monday confirmed that it received 11 complaints of larvae in the tap water between July 14 and 19, of which seven were confirmed to be midges and mosquitos.

Prime Minister Chung Sye-kyun addressed concerns about a nationwide spread of larvae in tap water Monday and ordered Environment Minister Cho Myung-rae to inspect all 484 water treatment plants nationwide to prevent the spread of the larvae.

The Ministry of Environment said Monday that inspections of 44 water treatment plants nationwide have been conducted since July 15.

The Incheon city government has advised people against drinking tap water for the time being and said it will supply water tanks for affected districts.

The GS25 convenience store chain said Monday that sales of bottled water nearly doubled in the period between July 15 and 19 in affected areas in Incheon, compared to the same period the previous week. CU saw a 50 percent increase between July 14 and 19 compared to the previous week. Online retailers have seen a sharp spike in purchases of shower filters.

In Incheon’s Seo District, 39 kindergartens, elementary, middle and high schools have stopped providing meals to students amid fears of tap water use. Students are being told to bring packed lunches. The crisis comes as schools in Incheon opened physical classes last month for the first time since the coronavirus pandemic.

In May 2019, Incheon faced a tainted water crisis. Residents of Seo District, Yeongjong Island and Ganghwa County were alarmed at the reddish rusty-looking hue of their tap water, which later was credited to mismanagement of water treatment facilities. 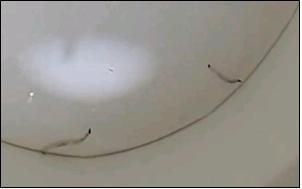 A resident of Paju, Gyeonggi, filed a complaint with the city Monday after larva-like creatures from the tap water were spotted the previous day. [YONHAP]