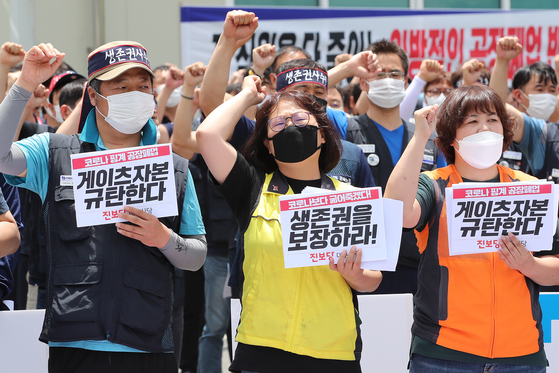 Korean Metal Workers’ Union members protest at the Gates Korea factory in Daegu on June 30 following a press conference. The manufacturer announced on June 26 its decision to shut down its business in Korea. [NEWS1]


Gates Korea, a mechanical goods manufacturer and subsidiary of Denver-based Gates, is closing and shuttering its Daegu factory, with 147 jobs being lost.

Daegu Mayor Kwon Young-jin recently sent a letter to the U.S. parent company asking it to reconsider the Daegu pullout. He argued that the exit will affect 6,000 people in the city.

No response has been received, and factory workers have been protesting at the Blue House.

Gates Korea only says it is leaving because of the pandemic, adding that it is considering its options and has not yet come up with an alternative solution. The company has maintained the stance that it is reviewing global business environment in order to boost business efficiency in the automobile market.

Gates is planning to supply parts from China to Hyundai Motor, essentially moving the production line from Korea to China. Some analysts say the move is aimed at reducing labor costs and avoiding labor restrictions. Last year’s average annual salary for Gates Korea employees is estimated at 50 million won ($42,000).

“The city is discussing potential benefits that the city can provide to Gates on the condition that the company will not pull its factory from Daegu,” said Kim Tae-woon, the director general of job creation and investment attraction of Daegu Metropolitan City. “However, Gates’ decision has been quite fast, making the situation more difficult.”


Foreign direct investment on the decline

The movement to leave Hong Kong has picked up ever since the Hong Kong security law went into effect on July 1. Neighboring countries have been focusing on attracting the Hong Kong-based foreign companies, but Korea’s central issue has been foreign investment leaving the nation.

As regional economies have been trying to take advantage of the Hong Kong exit, dubbed Hexit, Korea is at a disadvantage because of the ongoing Korean exodus, sometimes called Kexodus.

The foreign direct investment (FDI) into Korea in the second quarter was 4.4 billion dollars, a 34.6 percent on-year decline. The Organisation for Economic Cooperation and Development (OECD) last May projected a 30 percent decrease in the average FDI value this year for Korea.

The issue is not limited to the manufacturing sector. Attracting finance companies to Korea from Hong Kong, an Asian financial center, is another far-fetched goal.

“We will try to improve the transparency that is often brought up as an obstacle in Korea’s strategy to become a financial center,” said Financial Services Commission Chairman Eun Sung-soo on Thursday.

Eun said while the agency acknowledges the need for a change, the tax system and 52-hour workweek is hard to amend.

The 52-hour workweek is considered a significant hurdle to foreign investment. In February, foreign CEOs of the financial sector met with Eun and requested that the hourly limit be removed as extra hours are inevitable when working with headquarters abroad.

In a study by the Finance Ministry, foreign financial companies responded that keeping the 52-hour-per-week requirement is virtually impossible.

Korea’s maximum corporate tax rate is 25 percent, higher than Singapore, at 17 percent, and the 16.5 percent in Hong Kong.

Issues have been raised with the income tax as well. Hong Kong’s maximum individual income tax rate is 15 percent. The Chinese government has recently announced it will impose its rate in Hong Kong, leading some to predict that Hong Kong’s elite personnel will move out of the territory, but Singapore is one of the most popular destinations for these expats. The maximum income tax rate there is 22 percent, whereas Korea’s rate is 42 percent, exceeding 500 million won.

“Hong Kong’s low income tax is what tempted rich people in China to move there,” said Park Ki-soon, a former head of Korea Development Bank's Hong Kong operation who used to serve as senior vice president and director of Beijing Representative Office in the Samsung Economic Research Institute. “In order to recruit them to Korea, income tax needs to be addressed.”


Corporate and income taxes not helping

In 2009, Korea designated Seoul and Busan as financial centers and said it would exempt new financial corporations in the area from all corporate and income taxes for three years, but this measure does not work in Seoul for all practical purposes. The relevant law states that it does not take effect in the financial center within the capital’s overpopulation control area.

Following the Fukushima earthquake in Japan in 2011, when businesses fled Japan for safety reasons, including BMW, Citi Group, Lufthansa and private equity firms, none of them moved their headquarters to Korea.

“In order to grab the opportunity of the global exit from Hong Kong, Korea must introduce policies as bold as in Singapore and Japan, instead of merely addressing the financial regulations,” said Kang Kyeong-hoon, finance professor at Dongguk University.

Some pointed out the problems inherent in the living environment of the financial hubs in Korea, such as Yeouido, western Seoul.

“Yeouido can be designated as the special economic zone, but there are no residential facilities for foreigners,” said Park. “Facilities like international schools must be built for their long-term use.”

“With the inflow of foreign capital, positive effects like investment and employment may follow,” said Lee Chi-hoon, an official at the Korea Center for International Finance. “If the manufacturing-centered Korean economy is combined with finance after attracting capital via the special economic zone equipped with tax benefits and convenient living environment, new synergy will be created.”