Top earners in Korea pay relatively little in taxes, but the burden has been increasing fast and could continue to rise quickly.

According to a 2020 study by the Organisation for Economic Cooperation and Development (OECD), the tax wedge for single high-income earners without children was 26.02 percent in 2019. That is the fourth lowest rate among the 34 OECD nations in the study, just above New Zealand, at 24.26 percent, Mexico at 23.16 percent and Chile with 8.33 percent. 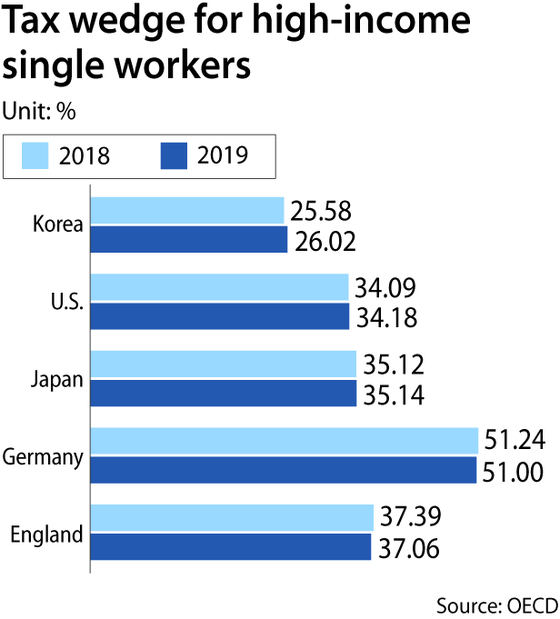 The tax wedge is taxes as a percentage of total labor costs. A lower number means employees keep more of their earnings. For the purpose of the study, top earners were those making 167 percent or more of the average wage.

The rate for Korea in the study is 0.44 percent higher than in 2018, the fastest increase in the study, tied with Slovenia. They were followed by Israel and Mexico.

In the study, the tax wedge in the United States increased by 0.1 percent and in Japan by 0.03 percent. The wedge decreased in Germany and Britain.

In a planned revision to the tax code, the top rate will be increased to 45 percent, from 42 percent, taking the total to 49.5 percent if local taxes are included. The tax wedge will increased as a result.

In 2018, 7.22 million employees, or 38.9 percent of the total, did not pay any income taxes. This is slightly lower than the 2017 value of 41 percent. The government estimates that the ratio of the tax exempt population will fall below 30 percent in two to three years as wages rise.